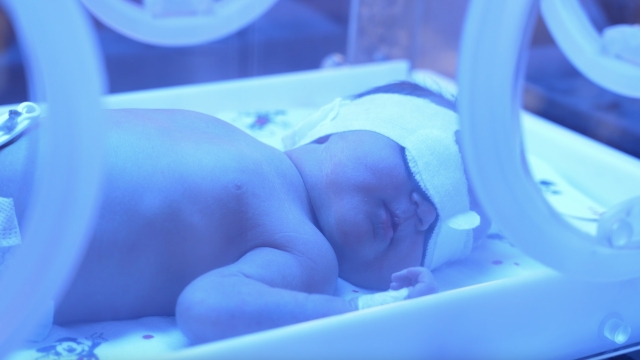 SMS
Mothers, Children Find Refuge After Attack On Maternity Hospital
By Jason Bellini
By Jason Bellini
March 10, 2022
Liliya and baby Daniel are part of a growing wave of expecting mothers and newborn babies taking refuge at a maternity hospital in Lviv, Ukraine.

A baby boy was born into war just three days ago.

His mother, Liliya Nedadaeva, barely made it out of Severodonetsk in the eastern Luhansk region of Ukraine before giving birth.

After seeing what has happened to her home city — and the maternity hospital shelled Wednesday in Mariupol — she has no intention of going back.

Liliya and baby Daniel are part of a growing wave of expecting mothers and newborn babies taking refuge at a maternity hospital in Lviv.

Daniel is healthy, but the hospital is seeing an unusually high number of premature births.

The director of the hospital says she's certain that is due to the stress of war.

One newborn, whose mother gave birth to her prematurely after arriving here from Kyiv, has serious respiratory problems. The baby is stable, but the battle is only half won.

Dr. Veronica Coldra, who's the head of the intensive care unit, says the trauma of war is affecting the ability for mothers to feed their newborns.

"Those women have problems with lactation," she said. "Because of the stress, some of them can't even breastfeed."

Alina Kelba is from Chernihiv, which is a northeastern city near the Belarus border. She is 32 weeks pregnant.

At the beginning of the Russian invasion, her city came under attack. She feared for the life of herself, her husband, her 3-year-old and her unborn child.

ALINA KELBA: You don't know if you will be alive next minute or not.

BELLINI: And being pregnant ...

KELBA: It's impossible to stay mentally healthy there.

After spending four nights in a shelter, they left Chernihiv realizing that if they stayed, she could be giving birth in a basement.

"We took only money and documents. We didn't even take clothes," Kelba said. "To be in [a] car [for] four days is really hard."

After an overdue sonogram, Kelba got some good news. The doctor says all looks normal.

BELLINI: Do you think you'll be able to bring your child back to your home?

KELBA: We want to go back. We left only because staying there was impossible.

This is a city where high-quality medical care is still available, where hospitals still stand, where babies can still be safely brought into the world. But they are preparing for the worst.

Outside of this hospital, sandbags now block the windows of the ICU. And the basement is being prepared for Russian bombs with a delivery chair and cots on a dirt floor.