Pat Summitt's Family Is Reportedly 'Preparing For The Worst' 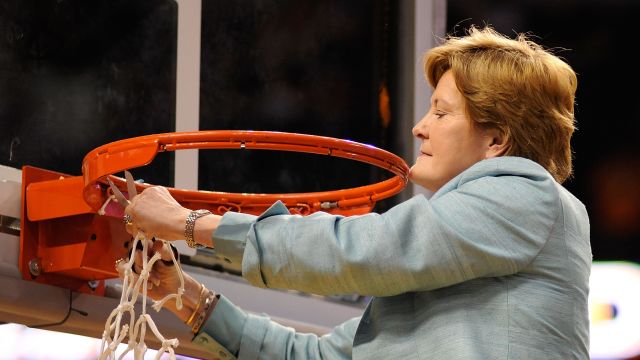 SMS
Pat Summitt's Family Is Reportedly 'Preparing For The Worst'
By Matt Moreno
By Matt Moreno
June 26, 2016
The legendary University of Tennessee coach stepped down as the Volunteers' head coach after being diagnosed with dementia.
SHOW TRANSCRIPT

Former University of Tennessee women's basketball coach Pat Summitt is reportedly "struggling" as it appears the legendary coach's health may be deteriorating.

Family members of the 64-year-old former coach told the Knoxville News Sentinel, "I don't think anybody knows whether she will last a day, a month, or a year."

Summitt, the winningest coach in NCAA basketball history, left basketball in March 2012, just a few months after being diagnosed with early onset dementia.

Since news about Summitt's condition broke, social media has been abuzz with the #PrayforPat in honor of the Volunteers coach.

"Candace Parker, you better deny the middle of the floor every time," Summitt said during a halftime speech at the 2007 Final Four against North Carolina.

In April 2012, she was also awarded the Presidential Medal of Freedom.

The Knoxville News Sentinel's report says as of Sunday morning, Summitt hadn't been moved from the retirement community where she lives, but family is "preparing for the worst."

This video includes clips from CBS, the University of Tennessee and images from Getty Images.