Past Antics Catch Up With Kanye At Glastonbury 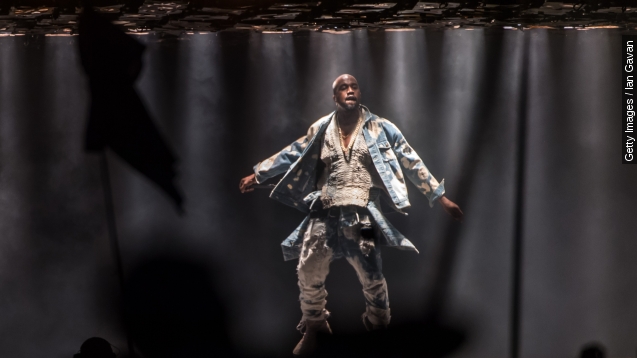 What happens when Kanye West gets … Kanye'd?

Fans found out Saturday at the Glastonbury Music Festival in England.

Brodkin stormed the stage in a white shirt that read "LEE-ZUS" and stood with his hands raised above his head until a security guard promptly escorted him off stage.

He posted on Twitter afterward, saying, "Some people were saying Kanye shouldn't headline Glastonbury so I thought I'd give him a hand."

Brodkin is likely referencing the fans who started a petition to have the festival replace Kanye with a rock band or "someone deserving."

More than 134,000 people signed the petition, but the festival organizers decided the show must go on.

Kanye's string of controversial performances this year have irritated many fans.

Similar to the 2009 VMAs incident, Kanye stormed the stage at February's 2015 Grammys, briefly interrupting Beck's acceptance speech in what many people were hoping was a joke.

Thankfully, it was, and Kanye let Beck finish — but not before Jay Z's panicked expression practically broke the Internet.

Also in February, Kanye's expletive-filled BRIT Awards performance left U.K. TV network ITV scrambling to censor the N-word in his hit "All Day," which features the word about 40 times.

The excessive use led ITV to miss the censor at least three times and at the Billboard Music Awards in May, ABC was forced to mute the song for a full minute of the performance.

That same month, Kanye's performance at 102.7 KIIS FM's Wango Tango concert led to hundreds of people leaving the venue before his final performance. He reportedly warned the audience he was going to perform the explicit version of "All Day" saying, "I'm going to use the N-word a couple of times. Is that OK?"

Apparently, it wasn't. Many parents took their kids home.

But that's OK because as Kanye proclaimed this weekend, those little kids still got a chance to see the "greatest living rock star on the planet."

This video includes images from Getty Image and music by Brenticus / CC BY 3.0