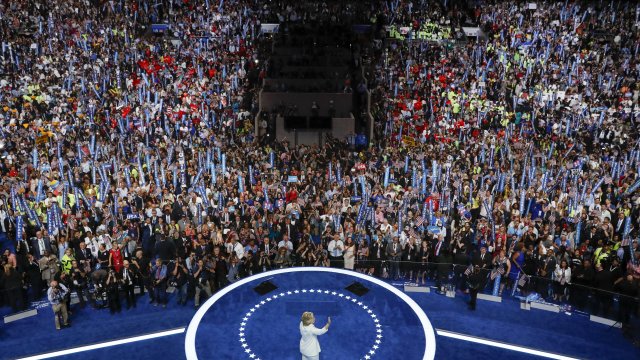 The coronavirus is affecting people, industries and the 2020 presidential election.

Some states are choosing to postpone their primaries, as others are carrying on despite health and safety concerns.

Concerns, that are at top of mind for both Republican and Democratic party leaders planning their respective conventions. The events bring around 50,000 people into one space, just about the furthest thing from social distancing and stay-at-home orders.

So could these conventions follow social trends and take place online?

"When we talked to political scientists they said while that’s never happened before there are ways that it could be possible," Katie Sanders, Politifact's managing editor, said.

But it wouldn’t be easy. Conventions aren’t just about grandiose speeches and confetti.

"They have to certify the delegates, they have to pass their convention rules and then they have to actually nominate the presidential and vice presidential candidates," Sanders said. "So when we’re talking about holding a convention virtually, sure people can give speeches everywhere but it’s really up to the parties to start figuring out now how that might work.”

There’s also the option of slimming down how many people can take part in the conventions, but, "it’s not necessarily a cure all to exclude journalists, family members, and other participants who would normally be at a convention,” Sanders said.

At the time of this reporting… the DNC had postponed its convention from July to August.

As for the RNC, “we have no contingency plan. We're having the convention at the end of august, and we think by the end of August, we'll be in good shape.”

It’s a wait and see kind of deal.