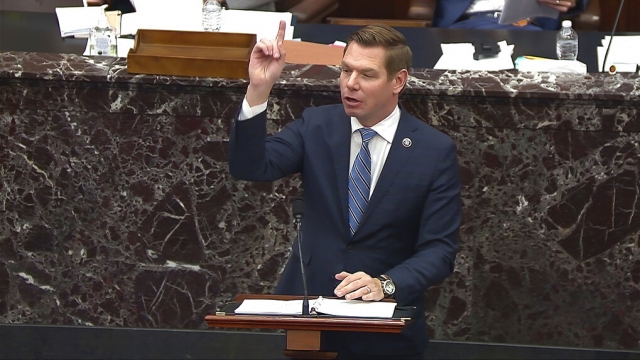 "Day one was full of video, almost like the cold open to a Rachel Maddow show," commented one Fox News anchor.

Cruising the aisles, or the airwaves during this week’s impeachment hearing proved there’s something for everyone. And that what you saw depends on which outlet you watched.

Take Tuesday and that dramatic video played by impeachment manager Eric Swalwell showing the Jan. 6 attack at the Capitol.

"You know how close you came to the mob, some of you, I understand, could hear them," said Swalwell.

All the major broadcast networks carried it live. But if you were watching Fox, impeachment news had to compete with Mark Cuban and the National Anthem — and a bit about the lawyer trapped behind a cat filter on Zoom.

Over on One America News Network, a final desperate text message from Swalwell was used to launch a personal attack about an alleged marital affair.

"He wanted to share his love with his wife of nearly five years...and not the woman with whom he's been having an alleged affair with for nearly the past decade," said a reporter.

On MSNBC and CNN, there was a lot of praise for the effectiveness of the House managers’ presentation that sometimes tipped over into outright gushing.

"It’s been so powerful. So dramatic. Everyone texting me, tweeting me, how can they not vote to convict and disqualify? But we’ll see," said one CNN anchor.

"Unbelievable, unbelievable evidence unbelievable day in the history of this country. I hope your private conversation is a sign of something but I’ve had beaten all of the hope out of myself when it comes to the GOP," expressed an MSNBC anchor.

The openly partisan coverage isn’t helping Americans’ faith in the media. Poll after poll shows people don’t trust the media, with 58% saying "most news organizations are more concerned with supporting an ideology or political position than with informing the public."

So why sacrifice objectivity when nobody trusts you to play it straight? One theory: consumers are naturally drawn to what reinforces their preexisting views - and quick to cast blame on the other side. A 2020 Gallup/ Knight Foundation poll found "more Americans say they are concerned about the bias in other people’s news."

That’s not to say that viewers don’t wish it wasn’t all so partisan. In that same poll, 81% said they believe the news media is critical or important to democracy.