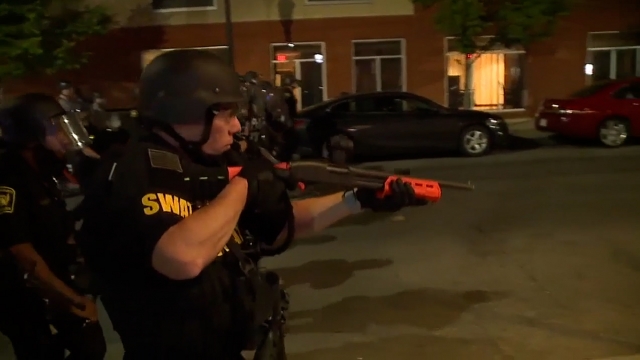 New, prepublication statistics the FBI provided to Newsy reveal a sharp increase in the number of American police agencies now disclosing information about serious use-of-force incidents they become involved in. The numbers, provided in advance of a wider release the bureau plans for later this spring, show that for last year 5,907 out of 18,514 federal, state, local and tribal law enforcement agencies throughout the nation participated and provided use-of-force data to the FBI's new national collection. That reflects a 17 percent increase from the 5,030 agencies that had reported in last fall.

A Newsy investigation in the summer of 2020 identified agencies all over the country that were not providing the data to the FBI. The bureau wants reports about any serious use-of-force incident, along with any incident where an officer fires their gun at someone.

Many large departments have begun participating, including the police force in the city where the nation's eyes will be for the trial of a Minneapolis police officer. After the George Floyd killing, police in Minneapolis told Newsy, "We are not sharing this data." But the agency did an about-face. Nationally, the most recent data made public from the FBI show more than 850 agencies have begun sending this data to the bureau for the first time, following our first report in June. One lawmaker wants to make reporting from every agency in his state mandatory.

"This bill intends to turn on the lights," said Missouri state Rep. Bruce DeGroot. The Republican lawmaker's Police Use of Force Transparency Act passed unanimously out of two committees already. DeGroot says he has the important backing of the Missouri governor and expects the bill to pass and become law. "I want people to be able to identify those hot spots. If there are police departments in the state of Missouri that are misusing their powers, we should know about it," he said.

The most recent FBI data show only 17 of over 600 agencies in Missouri participated in the national use-of-force program from January through August of 2020. The legislation in Missouri could add to what the FBI says is a sudden surge in participation nationally. The FBI's most updated prepublication statistics, which are still being finalized, show that as of mid-March officers employed by participating agencies represent 52 percent of federal, state, local and tribal sworn officers in the nation. That is up from 41 percent last summer. The FBI says it needs participation from 60 percent before it can publicly release any national or regional incident data from its new collection.

"The importance of this data is not just identifying one incident here or there, it is identifying patterns of incidents, patterns of behaviors that may lead to higher levels of violence," said Steven Lewis, the police chief in Ellisville, Missouri, outside St. Louis.   Lewis believes that the public will be surprised to learn, when the FBI finally releases the incident data nationally, that the majority of police agencies rarely use serious force in comparison to the number of times they have contact with or arrest individuals. But Lewis says the public must get information about any serious injury or firing of a gun during an interaction with police."We need to see what is the truth of what's going on across our country as it relates to police officers and their taking of lives of people," he said.

The FBI will release a new list of agencies and formally publish the list of those who have come online to its program later this spring. For now, the bureau tells Newsy that "many" states are looking to require reporting into the FBI's program, which under federal rules is only voluntary. The extra step may be needed. Police in Dallas, Texas, promised Newsy in a July 15, 2020 email that "from this point forward" the agency would make the disclosures to the FBI. But when Newsy checked, Dallas police never followed through.  "I cannot provide you an explanation as to why that participation in the FBI program never took place," said Sgt. Warren Mitchell, a spokesperson for the Dallas police. "The department should be uploading data in the very near future. We do believe in the program and feel our participation will be beneficial. Thank you for bringing this to our attention," he said. Nick McMillan contributed to reporting for this story.

Mark Greenblatt is senior national investigative correspondent for Scripps Washington Bureau and Newsy. Rosie Cima is a data reporter for Scripps and Newsy.