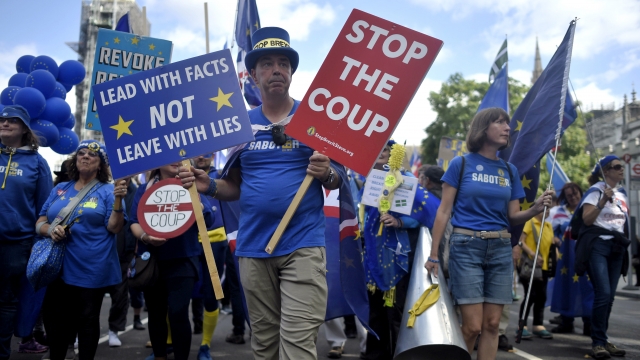 SMS
Parliament Defies Johnson, Schedules A Vote On Delaying Brexit
By Peter Hecht
By Peter Hecht
September 3, 2019
The 328-301 vote is a big defeat for Prime Minister Boris Johnson and may signal a coming loss for his demand for a no-deal Brexit.
SHOW TRANSCRIPT

The British Parliament rebuked the prime minister and his government over Brexit Tuesday. Members voted 328-301 to set a vote Wednesday to block a divorce from the European Union without an advance agreement for terms of withdrawal.

The vote in Parliament came with Britain's political system rocked by turbulence. Earlier Tuesday, Prime Minister Boris Johnson lost his majority in the House of Commons due to defections in his own party. That alone may mean that Johnson and his party will face a general election, allowing them to reassert power or lose it.

Thousands of protesters had already gathered in the streets of London, decrying Johnson's controversial move to suspend Parliament for five weeks, starting around Sept. 9. That was widely seen as a move to blunt Parliament's ability to block Johnson's efforts to pull Britain out of the European Union under a no-deal Brexit by the Oct. 31 deadline.

Protesters denounced the move as a threat to Britain's democracy itself. Johnson argued a no-deal Brexit would force the EU, its biggest trading partner, to negotiate more favorable trade terms once Britain was out. His opponents in Parliament, including defectors from his Conservative Party, argued it would weaken Britain's position and trigger an economic disaster.

Brexit opponents claim leaving the EU, particularly with no deal, will create shortages of food and medicine, disrupt travel, and create a hard border with Ireland, which is remaining in the EU. As protesters shouted in the background on Monday, Johnson said he is standing firm on behalf of British voters who backed the 2016 Brexit referendum.

"I want everybody to know there are no circumstances in which I will ask Brussels to delay. We are leaving on the 31st of October, no ifs or buts. We will not accept any attempt to go back on our promises or scrub that referendum."

Johnson, a former London mayor, became prime minister in July by winning 66% of the vote among 159,000 Conservative Party members, not by a popular vote. Then he called for a general election Oct. 14 if Parliament stopped a no-deal Brexit while claiming he didn't want the election.

It will take a two-thirds vote in Parliament to trigger the election. Yet the rival Labour Party has been opposed because it doesn't trust Johnson's motives. Skeptics believed he would push back the Oct. 14 vote until after Britain has left the EU without a deal on the 31st. Now political observers say defections in Johnson's own party could force a general election.