Parkland Survivor Maddy Wilford Returns To Hospital — As An Intern 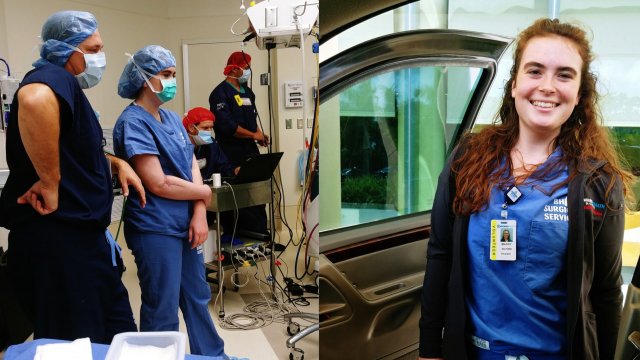 SMS
Parkland Survivor Maddy Wilford Returns To Hospital — As An Intern
By Jamal Andress
By Jamal Andress
February 13, 2019
After she was shot in the Parkland school shooting last year, she had five surgeries. She's returning to the hospital soon — this time as an intern.
SHOW TRANSCRIPT

Maddy Wilford, like any American teenager, is ready for graduation.

JAMAL: "Is the idea of graduating exciting? Or are you just kind of rushing to the finish line?

"MADDY: "I just kind of want to be done. Like, I've always wanted to get out of Florida, but now, definitely time to get out."

And while she can laugh about walking across the stage and leaving Florida behind now, last year, that wasn't a foregone conclusion.

DAVID: "She was shot badly. You know, to the point they thought she was dead when they walked in the room. And through surgery and divine intervention she had a miraculous recovery."

Maddy is one of the 17 students who was injured during the attack at Marjory Stoneman Douglas high school last February.

MADDY: "I felt this, like, big snap on the side of my side. It didn't feel like anything sharp. It felt like just a ton of bricks hit hit me. And then I realized, like, I was shot. I was like, panicked and just feeling like, I got shot, what am I gonna do? … I remember like, slowly fading, and then I blacked out."

She was shot three times in the chest, torso and right arm, leaving her in critical condition. When she arrived at the hospital, Dr. Igor Nichiporenko performed five surgeries in two days to save Maddy's life.

MADDY: I was in and out of consciousness when I was, like, in the ambulance or in the hospital. But I finally woke up Thursday night. So after like a day and a half, I finally woke up fully. … It was also, like, a lot of fear, like, waking up not being able to talk and then realizing that, like, the shooting actually happened."

DAVID: "What I've tried to do is just listen. Because what are you supposed to do when your kid gets shot? … And no matter how, no matter how hard I try, I can't relate to that. And nobody else can, either. Unless you went through it."

Since the shooting, Maddy's been able to not only recover from her physical injuries but draw purpose from them.

MADDY: "Going in there, it felt really cool to, like, shadow doctors in the ER and see what they do. But what was, like, really amazing was going and seeing the surgeries."

The summer following Maddy's tragic injury and incredible recovery, she returned to the hospital where she was cared for — this time as an intern. She even got to scrub in for rib repair surgery, the same procedure she received a year ago.

MADDY: "It's really closure for me, because being able to see like, 'Oh, they did that to my body.’ And like, understanding how they fixed me was kind of, like, interesting and kind of, like, helped heal me a little, in a way."

DAVID: "All the doctors that I talked to at the hospital were just very impressed with her. They say she's got a natural affinity for medicine. And I don't know what that is, because I'm not a doctor. But it's either just the presence or the confidence or the understanding or something, or just natural interest. I'm just really proud of her."

MADDY: "Having a background of being in a hospital and being that close to death, and then like, recovery, like a week later, I feel like I'll be able to help people and like, let them know that I've been through something like that."

And while Maddy can't prevent the next mass shooting, she does plan to be there for future shooting victims.

MADDY: "The power of, like, medicine helped me, and just knowing that like, it helped me makes me want to, like, be able to use that to help other people."