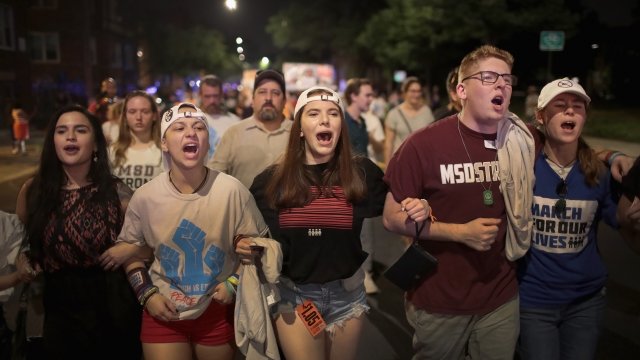 SMS
Parkland Students Start Nationwide Bus Tour In Chicago
By Jake Jones
By Jake Jones
June 16, 2018
Called the "March for Our Lives: Road to Change," the tour includes stops in 75 cities across the country.
SHOW TRANSCRIPT

Called the "March for Our Lives: Road to Change," the tour includes 75 cities across the country.

Former U.S. Rep. Gabrielle Giffords spoke at the first event in Chicago. She survived a close-range gunshot to the head in 2011.

"It's time for courage," she said. "We must do something. We must stop gun violence."

Students said they chose to start in Chicago because of the city's reputation for gun violence. Despite Chicago's strict gun laws, a 2015 study showed neighboring states with less restrictive gun control, like Indiana, supply a large number of the firearms used in both gang-related and non-gang-related violence. That study used data from the Bureau of Alcohol, Tobacco, Firearms and Explosives as well as the Chicago Police Department.

The tour's next stops include St. Louis, Kansas City and Omaha.