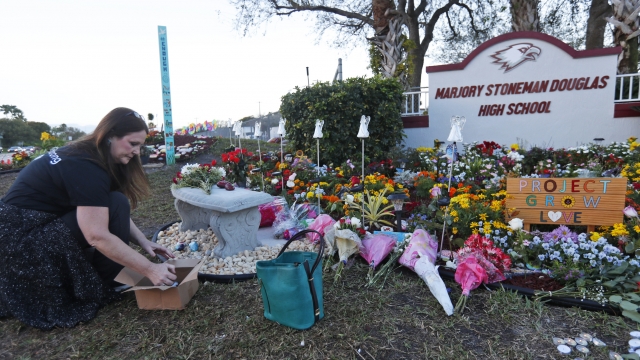 SMS
Parkland Shooter's Penalty Trial To Start Monday
By Haley Bull
By Haley Bull
July 17, 2022
The gunman pleaded guilty in October to the 2018 massacre; now the jury has to decide whether he gets a sentence of death or life without parole.

But at a time when the nation is still grappling with gun violence and school shootings, a jury inside a Florida courtroom will decide whether the Parkland shooter should be sentenced to death.

"We know it's not going to be easy for our families; we know that we're going to hear some things that some of us didn't know. We're going to hear, I'm sure, some details of what happened that day that will be particularly troubling to anybody who knew any of the victims. And we'll learn probably exactly the fate that befell our daughter at the hands of her murderer," said Montalto. "She was kind; she was compassionate. And those are some things that are definitely missing in this world without her."

There will be no dispute in court over the horrific loss of life in Parkland, Florida February 14, 2018.

At hand for the jury, they will consider whether the state proves at least one aggravating factor beyond a reasonable doubt, for example, whether the capital felony was especially heinous; then whether those factors outweigh any mitigating circumstances, the defense argues.

The jury will consider whether he gets the death penalty or life in prison without parole. In Florida, a death penalty must be unanimous.

"The size and scope of the case is large. And so, the prosecution is going to have its work cut out for it to focus the jury on what it wants the jury to hear on that," said Director at Miami Law Innocence Clinic Craig Trocino. "The defense on the other hand, is going to have a challenge of focusing on Mr. Cruz and him as an individual and capacity of mitigation."

The case is expected to last several months. Jurors could hear victim impacts, see sensitive evidence of the crime, hear from mental health experts, and even view the school building itself.

"Well, I think the prosecutor will focus on evidence in the case that shows a planning, intentionality, thought," said Jennifer Zedalis, University of Florida senior legal skills professor and trial practice director.

Zedalis says the defense may try to show be broader evidence.

"You know, medical, social, psychological, environmental factors that have weighed into ... you know, ultimately what his makeup was," said Zedalis.

But through this case, a focus remains on the people taken.

"The ultimate tragedy here is who was taken from us and taken purposefully, and we need, as a society, to find a way to prevent these things," said Montalto.

Since February 14, 2018, some Parkland families have worked for changes in school safety, mental health, and firearms regulations.

Since jury selection began, several mass shootings have occurred across the country. In Buffalo, Uvalde, and Highland Park, to name a few.

"We are parents who refuse to call Joaquin a victim. He's an activist and we follow his lead," said Father Manuel Oliver, father of Parkland shooting victim Joaquin Oliver.

Oliver appeared on Newsy after he interrupted a White House event ushering in the bipartisan passage of new gun legislation that advocates have said is a step forward but not enough.

"I think they might save a few lives and that is reason enough for us to more than welcome this resolution, but there's way more that needs to be done," said Oliver.