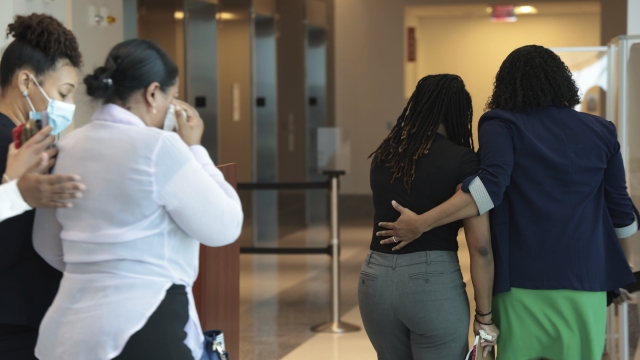 SMS
Parkland School Shooting Trial Details Deadly Case 4 Years Later
By Haley Bull
By Haley Bull
July 18, 2022
The state's case against the Marjory Stoneman Douglas High School gunman will result in the jury deciding whether there was an aggravating factor.

Four years later, the horrific details of the shooting at Marjory Stoneman Douglas High School in Parkland, Florida, were recounted in court as the penalty phase started for the convicted gunman.

A jury will consider whether the gunman should receive the death penalty or life in prison without parole for killing 17 people and injuring 17 others in the Feb. 14, 2018 shooting.

The gunman pleaded guilty to all 34 counts against him last year.

"I'm going to speak to you about the unspeakable, about this defendant's goal-directed plan, systematic murder — mass murder — of 14 children, an athletic director, a teacher and a coach," lead prosecutor Mike Satz said.

In opening statements, the prosecution read through the defendant’s statements on cell phone video made days before the shooting, quoting the gunman stating, “My goal is at least 20 people with an AR-15 and some tracer rounds.”

The court went through each of the gunman’s movements down the school's hallways and classrooms, each person shot, how the gunman went back and fired at some already shot again.

“Almost instantly I called 911, just out of instinct," said Brittany Sinitch, a teacher on the first floor during the shooting. "They couldn’t hear me over the sound of the gun shots it as so incredibly loud, and that was it. We just hid under my desk, we hid in the corners and we tried to stay as quiet as possible."

Students inside shot-into classrooms detailed what unfolded. Jurors were played videos from inside a classroom where multiple students were shot — one fatally.

“He still hadn't shot into our classroom at that point," Danielle Gilbert, a former student, said. "We were just sitting kind of like sitting ducks. We had no way to protect ourselves, no way to stand up for ourselves."

Families of those killed were in the courtroom, as the harrowing moments were detailed. Leading up to the penalty phase, some focused on remembering the lives taken.

Tony Montalto spoke the week before opening statements. His daughter, Gina Rose, was among those killed.

“So as with any mass murder, we spend too much time talking about the perpetrator and not enough time remembering the victims," Montalto said. "Not the fact that they were victims, but who they were before they were murdered, the vibrant parts of our community. That's what should be remembered.”

The trial is expected to last months, following a months-long jury selection process. The 12 jurors and 10 alternates may also hear victim impact evidence and even view the school building itself.

The jury will consider whether the state proves at least one aggravating factor beyond. The state could potentially argue aggravating factors, like whether the defendant knowingly created a great risk of death to many persons, it was especially heinous, atrocious or cruel or it was committed in a cold, calculated and premeditated manner. The jury will consider whether those outweigh any mitigating circumstances.

The defense held off on making its opening statement. Court filings indicate the defense may argue mitigating circumstances related to mental health, dating back to the pre-natal period.

“They’ll try to present a very broad, broad spectrum of evidence having to do with you know, medical, social, psychological, environmental factors that have weighed into, you know, ultimately what his make up was," said Jennifer Zedalis, a senior legal skills professor and trial practice director at the University of Florida Levin College of Law.