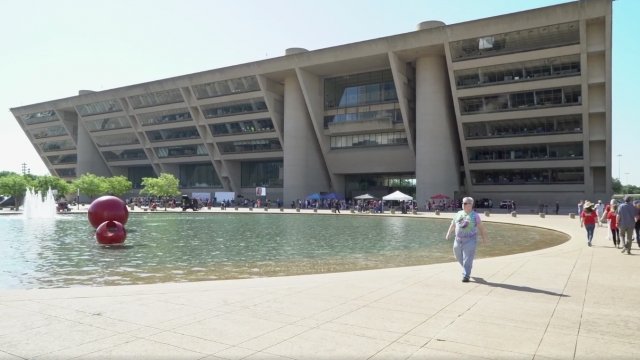 On the same weekend the NRA held its annual meeting in Dallas, protests of the event were organized across the city.

That includes the one at Dallas City Hall, where Manuel Oliver — who lost his son, Joaquin, in the Stoneman Douglas High School shooting in Florida — called on lawmakers to stop taking money from the NRA.

"We're voting in November, and it's in our hands," Oliver said. "That's why it's so important to us to get people to register to vote and actually go and vote that day of the elections. We need that change first; that’s a first step. Don't be involved with the interests of a lobby that is only willing to send more guns."

It's an issue that Oliver and several protesters said will be on their minds as they head to the polls this November for the midterm elections. But those who can't vote yet said it's the most important political issue for them, too. Tommy Murray, a survivor of the Sandy Hook Elementary School shooting, said he's fed up.

"I'm here to send a message to the NRA that were still sick of all this nonsense and we want change," Murray said. "After five years, nothing has been changed since Sandy Hook and we're just sick of that, and we want the NRA to stop deflecting from the actual problem here and actually focus on what's happening and do something about it."

The NRA's decision to hold its annual meetings in Dallas was controversial from the start. In fact, the city's deputy mayor suggested the convention be held in another city. However, he said he feels positive about the conversation it's started.

"When you see the demonstration and opportunity to send a message — a strong message to the NRA, as it relates to gun violence," Dallas Mayor Pro Tem Dwaine Caraway said. "And you see a movement such as this — this is a movement of the future."

The protest at city hall was one of many organized across the city on Saturday. It was met with counterprotesters — many of whom were proudly displaying their guns. But the main demonstrators weren't discouraged by them and want them to know that they can work together.

"I just want to spread the news that there are easy laws out there that don't violate the 2nd Amendment that we know already save lives, like background checks on every gun sale," said Moms Demand Action volunteer Amanda Johnson.