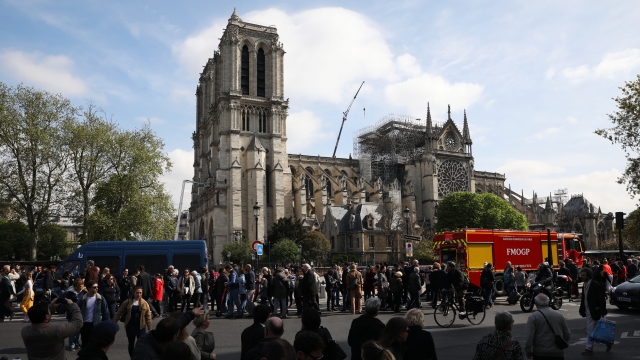 Paris police are warning the public about lead exposure from the Notre Dame cathedral fire. They say large amounts of lead-filled dust may have spread to nearby homes and businesses.

According to an Associated Press translation, officials suggest that people around the cathedral thoroughly clean all surfaces where dust could have settled.

Notre Dame, which is more than 800 years old, was in the middle of a $6.8 million renovation project when it caught fire on April 15.

Although the two towers and main shell remained intact, the church's spire and roof collapsed in the fire. Both had been built using lead, which melted down into particles as the flames grew hotter.

While the majority of long-term harm from lead poisoning stems from months or even years of exposure, the CDC says even short-term exposure to high amounts of lead can lead to abdominal pain, headaches and a loss of appetite.

Police reportedly said they'll reopen the gardens surrounding the cathedral as soon as lead levels in the air have returned to normal. The cathedral itself is expected to be closed to the public for years as it undergoes renovations.