Paris' Notre Dame Cathedral Has A History Of Disrepair And Rebirth 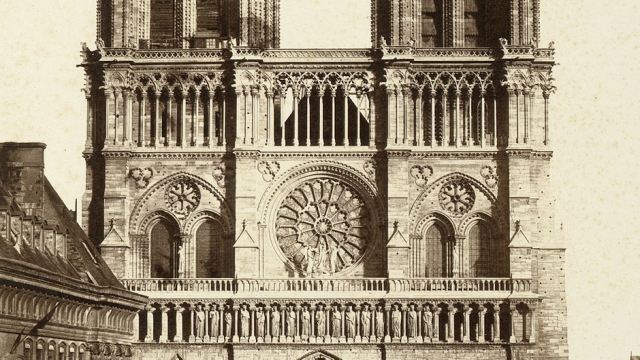 What you're seeing is the fall of one of the oldest, most iconic Gothic structures of the world: Paris's 850-year-old Notre Dame Cathedral.

On Monday, a fire engulfed the building, leaving viewers all over the world in helpless disbelief. But amid the destruction, it's worth noting the structure's own history. For centuries after its completion in 1345, Notre Dame fluctuated between states of disrepair and renovation.

One of the earliest repairs happened in the mid-1800s — after the building suffered through both French Revolutions, and after it had lost its spire once before.

That renovation effort was spurred by Victor Hugo, who wrote in "The Hunchback of Notre Dame": "Great edifices, like great mountains, are the work of centuries. ... Human intelligence is there summed up and totalized."

It was that praise, and the popularity of Hugo's book, that compelled the French government to restore the cathedral from its disrepair — and that allowed it to survive for centuries more, despite destructive wars and years of pollution.

In 2017, experts and cathedral advocates called for more renovation, citing crumbling stone and fallen gargoyles. That year, a cathedral spokesperson told The New York Times, "The more the wind blows, the more all of these little pieces keep falling."

The renovation project was estimated at $180 million. And it calls to mind another passage Hugo wrote: "One cannot but regret ... the innumerable degradations and mutilations inflicted on the venerable pile, both by the action of time and the hand of man."

By Monday evening, a spokesman told news outlets that "nothing will remain from the frame" of the cathedral. Despite that, French President Emmanuel Macron said Notre Dame will be rebuilt — just as it was years before.