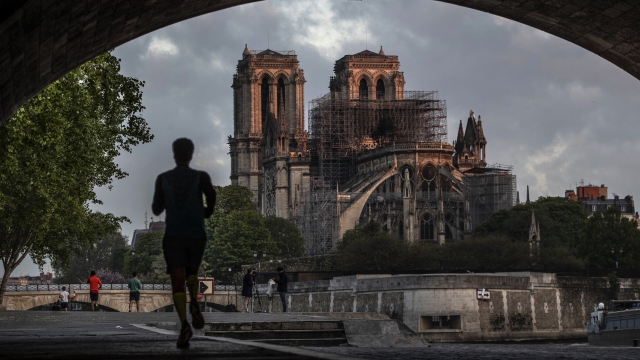 In April, the world watched as flames engulfed the cathedral and destroyed the 850-year-old roof and the spire. Beyond the structural damage from the fire, Chief Architect Philippe Villeneuve told reporters there was also shock to the beams from firefighting efforts and that the masonry is saturated with water. Since the fire, sensors have been placed in the cathedral to detect movement. There hasn't been any so far.

But adding intense heat into the mix could make matters worse. Villeneuve said he's very worried because if the structures dry too fast, the vaulted ceilings could collapse.

Meteo-France has already put 80 of France's 96 regions on high alert due to the heat. Meteorologists are expecting the Europe-wide heat wave to peak on Thursday, and Paris is expected to reach a record-shattering 107.6 degrees.

Villeneuve said: "What I fear is that the joints or the masonry, as they dry, lose their coherence, their cohesion and their structural qualities, and that all of a sudden, the vault gives way. As I speak here, the vaults could very well collapse."

Villeneuve said the vaults have not been accessible since April 15. Specialists are working to stabilize Notre Dame before they begin reconstruction.