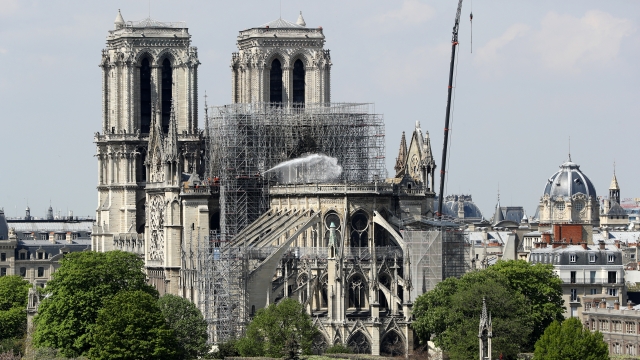 Officials in Paris closed streets surrounding Notre Dame Cathedral on Tuesday so workers can clear the area of lead.

A massive fire destroyed parts of the cathedral in April. The building was under renovation at the time.

But rebuilding efforts were paused after environmental groups voiced concerns the restoration could release dangerous amounts of lead into the air.

Tons of lead melted and spread when the cathedral caught fire. Recent tests found lead levels of more than 1 million micrograms per square meter in the cathedral's square.

Robin des Bois, a French environmental group, said in a statement back in April, "The cathedral has now become filled with toxic waste."

Workers will use an absorbent gel and high-pressure water jets to clean the area contaminated with lead. City officials said decontamination operations will take three to four weeks. Reconstruction of the cathedral is expected to resume on Monday.