Paris Attacks Show Why Stadium Security Is So Important 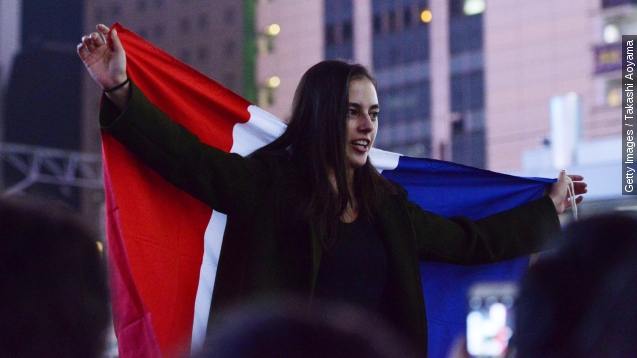 A stadium guard in Paris reportedly prevented one suicide bomber from entering the Stade de France on Friday.

"That purse is too big," a security guard tells an NFL fan.

It's one of the more dreadful experiences of going to a live sporting event: standing in long security lines, restricting the items you take in and more, all before you even enter the stadium.

But as the tragic Paris attacks have showed us, security is crucial to keeping fans safe.

A security guard outside of Stade de France stopped one suicide bomber from entering the stadium when a screening found the explosive on the bomber. The terrorist detonated the bomb right outside the stadium. (Video via Sky News)

Even though Friday's attacks killed more than 120 people, the death toll could've been much higher if security hadn't discovered the suicide bomber prior to entering the stadium. Four people, including the three bombers, were killed. (Video via France 24)

Sporting events have been the targets of some of the worst bombings in history.

In the U.S., three people were killed and 264 were injured after two bombs went off at the 2013 Boston Marathon. The two pressure-cooker bombs detonated in a crowded area near the finish line.

Before that, there was the 1996 Centennial Olympic Park bombing in Atlanta. It claimed the lives of two people and injured 111. It wasn't until more than six years later that bomber Eric Robert Rudolph was arrested for the attack.

In both cases, bombs were hidden in large backpacks.

More than 80,000 fans attended Friday's soccer match between France and Germany. At least three bombs went off near the stadium, and authorities tell The Wall Street Journal at least one of the suicide bombers planned to detonate inside the stadium. (Video via BFMTV)

The long lines might be inconvenient and the restrictions on carry-in items are a pain, but sports fans across the world have security officials to thank for saving so many lives.