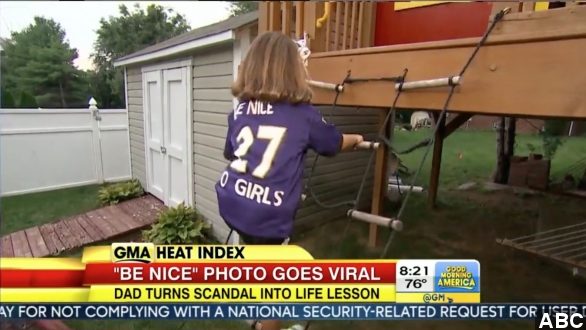 The Baltimore Ravens have cut running back Ray Rice from the team, but the football season continues, as will this controversy. And one place you can see it all embodied: the wearing, or not wearing, of Rice's jersey.

Some have thrown them in the trash, according to the Baltimore Business Journal. Others have even set their jerseys on fire.

But Bryan and Angie Bartlett, for example, wanted to take a less destructive route when it came to their 6-year-old daughter Brynn's jersey.

BRYAN BARTLETT VIA ABC: "I had this idea. It was a little bit more positive."

RYAN SMITH: "Cleverly changing the name 'Rice' on the back to the word 'Nice.'"

Bryan added a few more letters to Brynn's jersey, so it now reads, "Be Nice to Girls."

The Bartletts wanted to make this a teachable moment. Bryan told NBC, "I was just hopefully teaching my daughter that we expect that guys always are nice to you and treat you with respect and that you don't put up with anybody being mean or hitting you or anything like that ever."

The image of Brynn wearing the improved jersey has gone viral. WABC says it inspired a mom to create her own "Be Nice to Girls" jersey for her 2-year-old son.

But still another route: some are wearing the jerseys in support of Rice. Several female fans told USA Today Rice's personal life should not have been a factor in his professional life.

Various other reasons given to the New York Daily News — that wearing the jersey is a statement against domestic violence, or that it's in protest of a punishment some consider too harsh.

One Baltimore pizza joint even offered customers to pay for their pizza with Rice jerseys.

Ultimately, there have been reports the Ravens will give fans a chance to exchange their Rice jerseys.