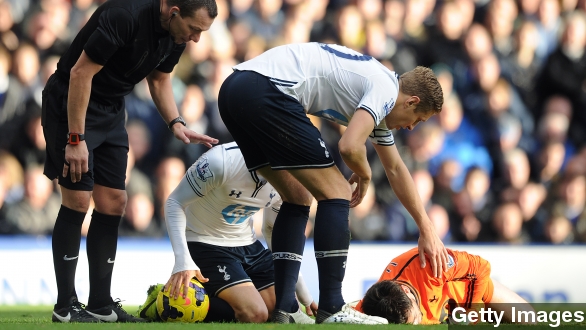 By Sebastian Martinez
August 27, 2014
A group of parents and players are suing FIFA and its associates in the U.S. They say officials haven't done enough to promote concussion treatment.
SHOW TRANSCRIPT

A major sports organization is facing a lawsuit over concussions suffered by players, but it's not football. Well, it is, just not in this country.

A group of parents and players are suing soccer's governing body FIFA — saying officials haven't done enough to promote the treatment of concussions in the soccer world.

The New York Times reports the plaintiffs in the case aren't looking to collect financial damages from FIFA and its affiliates in the U.S., "but rather changes to the sport's rules, from limits on headers for children to altering FIFA's substitution protocols."

Although not as widely publicized as concussions in football, soccer concussions, especially among minors, have been in the news before.

And as USA Today writes, FIFA just faced the question of concussions earlier this week at a summit hosted by the NFL in New York. A FIFA official was quoted as saying: "We are not alarmed. The situation is about the same over the past 16 years ... From FIFA's side, we will strengthen the position of the team doctor, as we did already in the past."

That statement refers to the debate over who should get the final decision on whether a player returns to play after suffering a concussion — the team doctor or physiotherapist or the coach. (Video via Sky Sports)

And it's a decision already taken by some top leagues, including England's Premier League, which gave the doctor the final say. That move was sparked by a high-profile concussion scare with goalkeeper Hugo Lloris, captain of the French national team, who lost consciousness while playing for Tottenham Hotspur but was allowed to return to play.

One of the possible reasons he was put back on was to save one of the team's three substitutions — a professional standard and another sticking point of the complaint.

Part of the 132-page complaint argues the limit of three substitutions, regardless of injuries, means "even if more than three players are injured during a match, and must leave the match ... a team may not replace the next injured player that must leave a match."

And soccer even has its own concussion-issues campaigner, former player and current analyst Taylor Twellman, whose career was shortened by his own concussion injuries. (Video via ESPN)

TWELLMAN VIA VILLANOVA UNIVERSITY: "The fact that our kids can head the ball a thousand times a week, but you can only throw 65 pitches every three or four days in Little League? There's something wrong with that."

The suit was filed in the U.S. District Court for the Northern District of California.