Navigating Life When You Have A Child With Disabilities 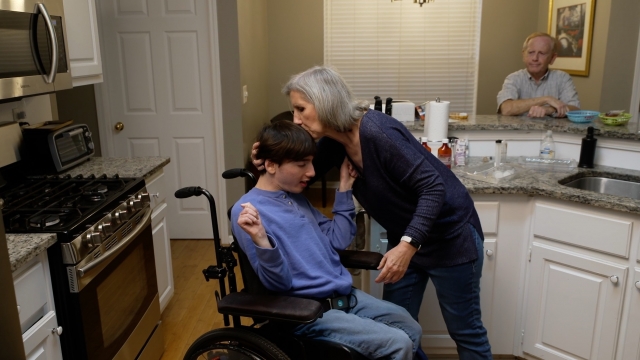 SMS
Navigating Life When You Have A Child With Disabilities
By Cat Sandoval
By Cat Sandoval
November 2, 2021
The CDC says more than three million children in the U.S. had a disability in 2019.

Meet 23-year-old Benjamin and his mom, Paula Krone. They are going to a fancy hair salon. A routine they do every five weeks. It's a chance for Paula to treat her son.

"He's worth it, you know, and people, a lot of people just don't understand that," she said.

Benjamin has mitochondrial myopathy. He can't see, speak or move many of his muscles

"People look at him because he doesn't talk," Paula said. "They don't understand there's a whole human being inside of him. He's not a vegetable."

Benjamin relies on his parents to stay alive from when he gets up in the morning to when he goes to bed at night.

The pandemic forced a new worry for Benjamin's parents: What happens when they're gone?

"If I die today, what would happen to him? I don't know. I don't know," Paula said. "I never thought I'd be at that point in my life to plan my own gravestone. And it was — it was hard to plan his. But what are you going to do?"

Paula said COVID made her become more aware of the time she has left.

The CDC says more than three million children in the U.S. had a disability in 2019. Modern science is allowing many to outlive their parents.

Yet a University of Illinois study found that nationally, less than half of parents of children with disabilities made long-term health plans. Among the problems were disagreements within the family of what to do compounded by the high stress of dealing with such a difficult decision.

Doctors had predicted Benjamin's life expectancy to be in his late teens, but he's outlived that, and he's growing older along side his parents. Paula is 67, and Benjamin's father, Michael, is 71-years-old.

"His mom and I are both getting old, and he weighs almost 80 pounds," Michael said. "We're not supposed to be lifting him, although we don't have any choice. He's a handful."

And then the scary moment happened last year, when Benjamin and his father contracted COVID from a home caregiver. The vaccine wasn't available then.

"We were really worried about him. But we got through it, and he had to go to the emergency room once," Michael said.

Now fully vaccinated, they still worry about what happens next.

"I need to outlive him and be healthy enough to take care of him until he dies," Michael said. "That it's my life goal is a terrible goal to have. But yes, that's my goal."

While Michael plans to outlive Benjamin, Paula is planning to get him into an assisted group home in case they pass before him — but she says there's no availability.

Disability care is expensive. Group homes can cost on average $65,000-$120,000, and it depends on insurance. Navigating the health care system can be complicated. The University of Illinois study found 46% of families identified finances as a "significant barrier" to planning for future care.

"We have a crazy life," Paula said. "Michael and I both love Benjamin more than life itself. The sun rises and the sun sets over Benjamin."

Paula and Michael may not see eye-to-eye on Benjamin's future care, but they still take time to enjoy as a family.