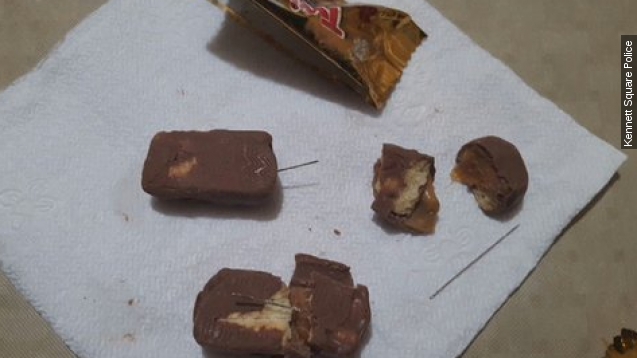 SMS
Parents Find Halloween Candy Laced With Needles
By Matt Moreno
By Matt Moreno
November 2, 2015
Police say there were multiple reports of needles in Halloween candy near Philadelphia and at least one report in Minnesota.
SHOW TRANSCRIPT

It's both parents' and kids' worst nightmare on Halloween. Police near Philadelphia are investigating several reports of sewing needles inside candy bars given to children over the weekend.

And the department posted another warning later in the day after a different report of a needle in a Snickers bar.

No kids were injured by the tampered candy bars, but unfortunately, Kennett Square wasn't the only town affected.

WCAU reports another Pennsylvania woman had a similar find.

"That's when they said it was definitely a needle hole and they assume that it's some kind of chemical put on the candy," Judy Vengoechea told WCAU.

And there was at least one more case after police in Minnesota also posted about a needle in a candy bar.

Although police always warn about dangerous items in candy, reported cases like these are relatively rare. Either way, parents are always advised to check their children's Halloween candy.

Police are still trying to determine where the compromised candy came from. There are no reports of arrests made in any of these cases thus far.