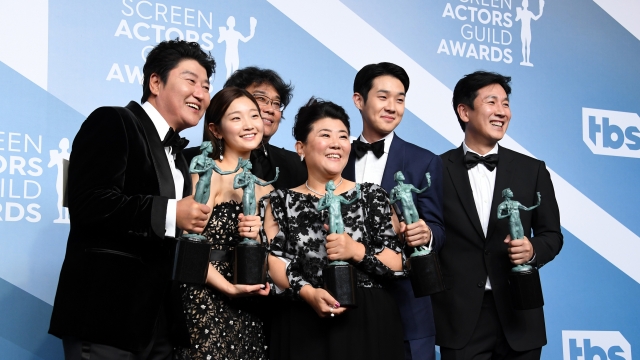 By Katherine Biek
January 20, 2020
The South Korean film beat out the casts of "Bombshell," "The Irishman," "Jojo Rabbit" and "Once Upon a Time in Hollywood" to claim the prize.
SHOW TRANSCRIPT

"Parasite" made history at the Screen Actors Guild Awards Sunday. It's the first foreign-language film to win the SAG award for outstanding performance by a cast in a motion picture.

The South Korean film beat out the casts of "Bombshell," "The Irishman," "Jojo Rabbit" and "Once Upon a Time in Hollywood" to claim the prize.

The annual SAG Awards only recognize on-screen performances. So this award is roughly the equivalent of winning best drama film at the Golden Globes — a category that "Parasite" wasn't even eligible for since more than half of the film is in Korean, not English.

"Parasite's" SAG Award is also notable because not one member of its cast was nominated for an acting category at the Golden Globes, BAFTAs or Academy Awards this year.

Despite recent pushes to increase diversity in nominations, both the 2020 BAFTAs and the Oscars recognized almost zero performers of color and received swift backlash for it.