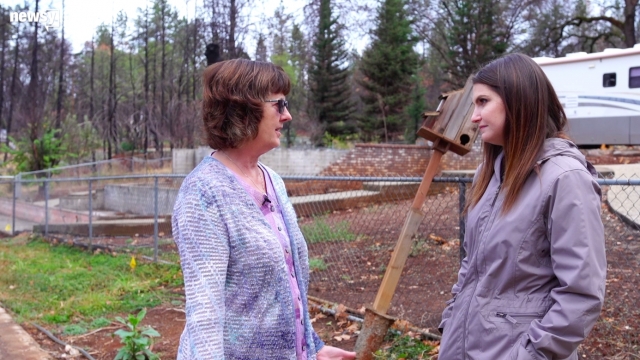 SMS
Mayor On Camp Fire Anniversary: "We're Not Survivors, We're Pioneers"
By Lindsey Theis
By Lindsey Theis
November 4, 2019
Newsy went back to Paradise, California to see how people there are getting by a year after the state's deadliest wildfire.

November 8th marks the one year anniversary of California’s deadliest wildfire. Last year, the Camp Fire burned more than 150,000 acres-including thousands of businesses and homes. It also killed nearly 90 people making it the deadliest wildfire in California's history. A year later, Newsy went back to the burnt scar area to see how people there are getting by and got a tour of the town with Mayor Jody Jones. 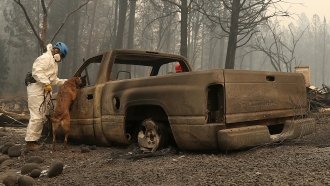 Taking Stock After California Wildfires Is A Long, Dangerous Process

"We're not victims we're not even just survivors anymore we're pioneers. We are building an entire town from scratch," Jones said.

Before the Camp Fire on November 8th, the town of Paradise, California was home to about 26,800 people. Now, a year later, door-to-door surveyors have counted just above two thousand residents.NAT crews. Debris crews have made a ton of progress but there are still signs of the Camp Fire everywhere throughout town. And it will take decades for Paradise to build back up. The Executive Director of the Housing Authority of Butte County, where Paradise is, says that the Camp Fire wiped out 90 percent of the housing here.

Jones thinks the town’s population could be closer to four thousand, based on records of mail delivery and garbage cleanup. So far, many here are still living in small trailers on the lots where their homes used to be, relying on generators for power and bringing in water from outside.

"The water is fine at the source. It's fine coming out of the plant. The main lines are ninety seven percent fine. The contamination is in the service lines from the mains to the houses mostly to the burnt houses. So the water district has a plan. They're focused on the houses and buildings that survived. And for the houses and buildings that survive they're testing the service lines and if they're bad they're pulling new lines for them and if they're good they're giving them the all clear. For the burnt properties more than half of them are contaminated," she explained.

Mayor Jones knows the challenges of rebuilding, she lost her home too – along with five others on the town’s council. She says right now, the hardest part for anyone rebuilding- is waiting. The town has approved more than 250 building permits and Jones says it's working on another one hundred and forty. But the city has issued only less than a dozen occupancy permits — which allow people to move back in. There’s a three- to ten-month waiting period for new homes. Permits, insurance, and tree removal add to costs and can be time consuming. The town says about one hundred thousand burned trees have been cut down already, and another three hundred thousand still need to come out.

"People won't rebuild. they're not going to rebuild a new house where trees are going to fall on their house. We've taken out 10 trees and we have probably four more to go, just to make it safe for the rebuild. It's about a thousand dollars a tree – between a thousand and fifteen hundred dollars a tree. So many people don't have the resources to do that!" Jones said.

Town leaders say it could take as much as 30 years before Paradise resembles the town it was before the Camp Fire. Aid has poured into help, and California’s governor has designated Paradise as rural, which makes it eligible for funds and help that its pre-fire population couldn't get. But still, Jones says, there’s much that hope and community will have to do on its own. 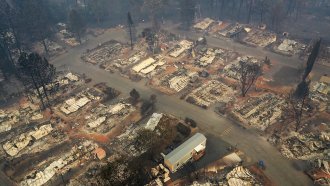 "We've all been through the same thing. So much trauma. Nobody else really knows what we've been through," she said.