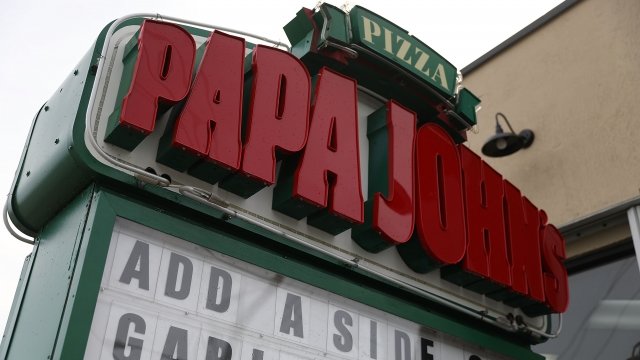 SMS
Papa John's Adopts 'Poison Pill' To Stop Founder From Getting Control
By Briana Koeneman
By Briana Koeneman
July 23, 2018
The pizza chain said its board of directors approved the adoption of a stockholder rights plan, which is also known as a poison pill.
SHOW TRANSCRIPT

Papa John's has decided to adopt a so-called "poison pill" plan after its controversial founder left a bitter taste in the company's mouth.

The pizza chain said in a press release Sunday its board of directors approved the adoption of a stockholder rights plan, which is also known as a poison pill.

A poison pill is a tactic used by companies to discourage hostile takeovers. The idea is to make the company's stock unappealing to an unwanted prospective buyer.

In Papa John's case, that unwanted prospective buyer is founder John Schnatter. He stepped down as chairman earlier this month after admitting he used the N-word during a conference call earlier this year.

He later said stepping down was a mistake and is reportedly trying to gather support from shareholders to remain on the company's board.

Schnatter and his affiliates currently own shares of common stock in excess of 30 percent, making them the largest shareholders.

Papa John's stockholder rights plan would kick in if Schnatter's group acquires 31 percent of shares or if another group acquires 15 percent or more shares. The plan would allow stockholders to purchase additional shares at a discount, therefore making the shares of any acquiring party less valuable.