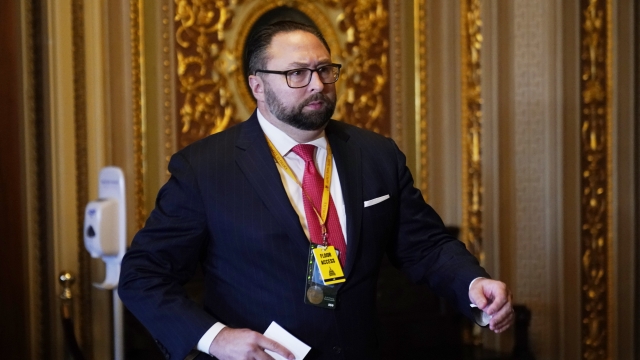 Further expanding its probe, the U.S. House committee investigating the Jan. 6 Capitol insurrection has issued subpoenas to six additional associates of former President Donald Trump who were closely involved in his efforts to overturn his defeat in the 2020 election.

The committee's chairman, Mississippi Rep. Bennie Thompson, said in a statement Monday that the panel is demanding testimony and documents from former Trump campaign officials and others who participated in a "war room" ahead of the siege and strategized about how to halt the certification of Joe Biden's victory.

Thompson said the committee had issued new subpoenas to Bill Stepien, manager of Trump's 2020 reelection campaign; Jason Miller, a senior adviser to the campaign; Angela McCallum, national executive assistant to the campaign; John Eastman, a lawyer who advised the former president; Michael Flynn, a former national security adviser to Trump who talked with Trump ahead of the insurrection; and Bernard Kerik, who the committee says paid for hotel rooms that served as command centers ahead of Jan. 6.

"In the days before the January 6th attack, the former president's closest allies and advisers drove a campaign of misinformation about the election and planned ways to stop the count of Electoral College votes," Thompson said. "The Select Committee needs to know every detail about their efforts to overturn the election, including who they were talking to in the White House and in Congress, what connections they had with rallies that escalated into a riot, and who paid for it all."

The subpoenas come after the panel has already demanded documents and testimony from several other Trump advisers — some who have cooperated and some who have not. The House voted last month to hold longtime Trump ally Steve Bannon in contempt after he refused to comply with his subpoena. Trump himself is fighting the probe in court.

The rioters who violently pushed back police to break into the Capitol and interrupt the electoral count repeated Trump's false claims of widespread fraud, and the committee says the six newly subpoenaed witnesses helped amplify the misinformation in the days ahead of the attack. Trump's false claims came as election officials and courts across the country verified President Biden's win, and as his own attorney general said there was no evidence of significant fraud.

Thompson says in the letters to the Trump associates that the panel has uncovered "credible evidence" of their participation in the former president's efforts to overturn the election and cites ways that they individually tried to further his cause.

In Stepien's subpoena, Thompson cites the testimony of an unnamed witness in saying he oversaw the "conversion" of Trump's presidential campaign to a "Stop the Steal" effort. In letters to Miller and McCallum, Thompson cites specific efforts to spread the false claims, including a phone call from McCallum to an unidentified Michigan state legislator asking if the Trump campaign could "count on" them and urging the person to push for the appointment of new state electors.

Thompson detailed several efforts by Eastman, a lawyer and professor, to persuade Vice President Mike Pence to try to overturn the election as he presided over the congressional certification — a power Pence did not legally have. Thompson also cites Eastman's outreach to states, including a briefing to state legislators, and his participation in the so-called "war room" at the Willard Hotel where he, Bannon, Kerik and others strategized ahead of the siege about how to overturn Trump's defeat.

Kerik, a former New York City police commissioner who was pardoned by Trump after serving time in prison for tax fraud and other charges, responded to his subpoena with a lengthy statement on Monday evening. He said that he "was not hired to overturn the will of the people, only to look into the integrity of the process" and that his focus after the election was on "looking for evidence," not public relations.

"As to the events of January 6th, I was not involved," he said.

The others contacted by The Associated Press did not respond to requests for comment.

In the letter to Flynn — the former national security adviser who twice pleaded guilty to lying to the FBI and was also pardoned by Trump — Thompson cited a December Oval Office meeting with the then-president. Citing media reports, Thompson said Flynn and other participants "discussed seizing voting machines, declaring a national emergency, invoking certain national security emergency powers and continuing to spread the message that the Nov. 2020 election had been tainted by widespread fraud."

The panel is working with other close Trump advisers to gain testimony, including former White House Chief of Staff Mark Meadows and administration aides Kashyap Patel and Dan Scavino. Members of the committee said they have been "engaging" with those witnesses but may move to hold them in contempt, as well, if they don't comply soon.

Trump's own opposition has prompted some of his advisors, including Bannon, to say they can't speak publicly about their roles. The former president's lawsuit argues that he can assert executive privilege, or a presidential claim to keep some information private, in an effort to block the government from releasing a tranche of internal White House documents to the panel. The committee has argued that privilege doesn't apply.

President Biden has so far waived executive privilege on nearly all the documents that the committee has asked for, citing the panel's need to investigate the violent attack.

In his subpoena to Eastman, Thompson sought to preemptively attack any attorney-client privilege that he may attempt to cite to avoid testifying. The letter noted that Eastman has already "made extensive public comments" regarding his legal advice and direct discussions with Trump.

Former Justice Department official Jeffrey Clark, who aligned himself with Trump's efforts to overturn the election as other department leaders pushed back, appeared for a deposition on Friday but declined to cooperate, presenting the committee with a letter saying he would not answer questions based on Trump's assertions of privilege, including in the ongoing court case.

Thompson said afterward that he had rejected the claims of privilege and said Clark "has a very short time" to reconsider and cooperate.

The committee has already interviewed more than 150 people across government, social media and law enforcement, including some former Trump aides who have been cooperative. The panel has subpoenaed more than 20 witnesses total, and most of them, including several associates who helped plan the massive "Stop the Steal" rally the morning of the 6th, have signaled they will cooperate.