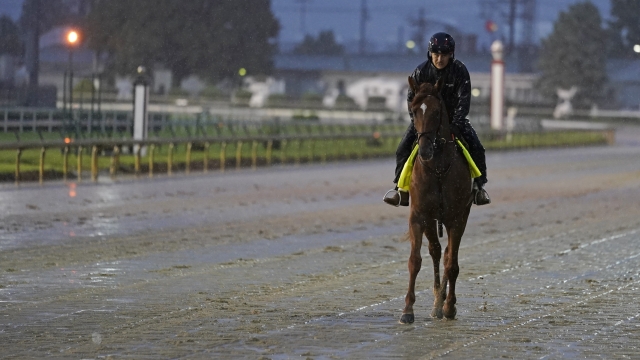 SMS
Racial Tensions and Pandemic Mark Saturday's Kentucky Derby Run
By Peter Hecht
By Peter Hecht
September 3, 2020
This will be a Derby like none other, with empty grandstands inside and racial justice protests roiling outside.
SHOW TRANSCRIPT

In its 145-year history, the famed Kentucky Derby at Louisville's Churchill Downs has produced many extraordinary moments.

But perhaps no Kentucky Derby will be as extraordinary as this Saturday's 146th "Run for the Roses." The race, moved from May due to the pandemic, will be held with empty grandstands and amidst searing racial tensions in the City of Louisville.

On Saturday, there will be more protesters present than horse racing fans. Thousands of people are expected to gather outside Churchill Downs to demand justice for Breonna Taylor, a local emergency room technician shot and killed by police in a raid on her home.

Authorities are preparing for a turnout ranging from protesting residents to gun carrying paramilitary groups including the Armed Black Militia and the opposing right-wing Three Percenters.

Louisville Mayor Greg Fisher said police will be keeping close watch to prevent clashes and vandalism and to maintain open streets for traffic.

"Racial justice is a goal that we all support and we support First Amendment rights," the mayor said. "We just have to balance the right to protest with our essential duty to preserve public safety."

Kentucky state police and National Guard troops will bolster security efforts, as they do for every Kentucky Derby. But in its 146th year, this clearly will be a Derby like no other.