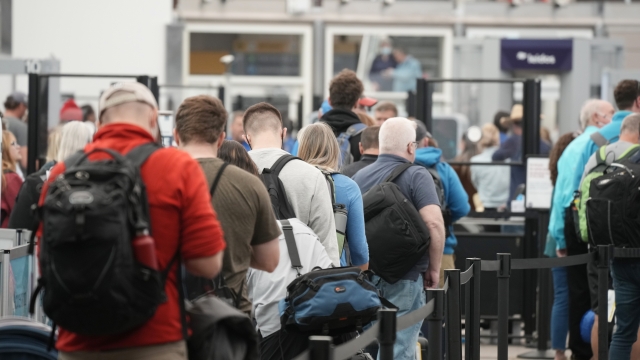 SMS
Pandemic, Economy Impacts Continue To Hurt Airlines Globally
By James Packard
By James Packard
June 17, 2022
Pilots are working more overtime than ever, and one airport leader says the system won't get healthier until the world is on the mend.

It's another nightmare day for airlines: More than 1,300 flights canceled within, into or out of the U.S.

Many more were canceled around the world, as airlines keep struggling to both build back from a pandemic that decimated their workforce and claw through a flattening economy that's upping the cost of their business.

"I've had more canceled flights in the last six months than I've had in the last 11 years we've been in business," said Jessie Lapido, travel agent.

Delta Airlines pilots said in an open letter to customers they're flying more overtime than ever before to keep up. They're on pace to fly more extra hours this year than in 2018 and 2019 combined.

"I think it will take 12 to 18 months for the whole industry to get all of its capacity back to where it was before the pandemic," said John Holland-Kaye, chief executive at London Heathrow Airport

Holland-Kaye leads one of the world's busiest airports. He’s feeling the pain, too, and he knows the system won’t get healthier until the whole world is on the mend.

"Very skilled jobs have been lost, and now we are having to, as an industry, recruit people back, train them up again, to be able to serve passengers and that just takes time," Holland-Kaye said. "It's very easy to slam the brakes on the industry and lead to enormous job losses, but it is much harder to scale it up again when you suddenly open the doors again."

Transportation Secretary Pete Buttigieg met with airlines execs this week to talk solutions. For now, it's hard to find them.

Ultimately, airlines need to hire and train many more pilots, flight attendants and ground crew. Until demand slows, it will be hard to both build back their airlines and keep them running smoothly.

"We're wondering at what point do consumers throw up their hands and say, I just can't afford to get on an airplane,'" said David Koenig, Associated Press business writer. "Ticket prices have gone up about, according to Adobe, 47% since January, and we may be getting near the tipping point for for some folks that this is as much as they can afford."