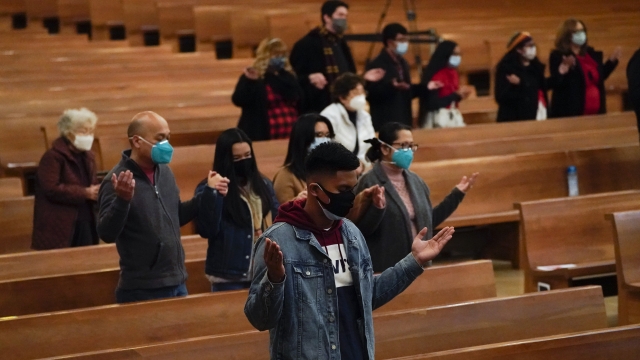 SMS
Pandemic Aftermath Leads To Mixed Bag For Religious Attendance
By Amber Strong
By Amber Strong
April 15, 2022
Many faith leaders are encouraging members to return to their places of worship, but the amount of regular churchgoers has plateaued.

Two years after navigating a global pandemic, many houses of worship are back in the swing of things.

While the doors of the church may be open, the question remains — are parishioners ready to come back?

The pandemic has been a time of sink or swim for many churches.

"We’re losing people because a lot of people have been out of church," said Rev. Michael Sumler of New Grafton Baptist Church in Virginia.

"We've grown, our capacity has actually grown," said pastor H. Patrick Cason of Bethany Baptist Church in Virginia. "We have new faces. We have new members. We have new leaders because of this."

According to Lifeway Research, the average U.S. protestant church reports attendance at 74% of what it was prior to COVID-19, meaning 1 in 4 church regulars haven’t returned to in person worship.

And according to Pew Research, the percentage of regular church goers who have made their way back to in-person worship has plateaued, remaining about the same since September of last year. That’s despite many faith leaders encouraging members to return.

Some may not be ready to take the leap with COVID numbers rising yet again, others may have moved on to new places of worship.

In early stages of the pandemic, parishioners had the option to worship online wherever they pleased.

"There are some people that have not come back that, you know, have joined other churches and gone in different directions because of the pandemic, and, you know, that's that's fine as well," Cason said.

Pastor and political science professor Ryan Burge says it may simply be part of a decline in religious memberships — something that started way before the pandemic.

"If we saw a drop of 5% in the last two years, what percentage of that 5% is due to COVID?" Burge said. "Or what percentage is just due to the natural decline that was going to happen as older people, you know, sort of die off and are replaced by less religious younger people?"

When it comes to pandemic attendance, the aftermath varies by location, the size of the church and even the faith tradition itself.

"So, faiths like Hindu, Muslim, Mormon, they were more likely to come back to church because they're younger and have less risk," Burge said.

The lack of attendance at churches did have a small impact on charitable contributions, leading some churches to close their doors permanently. But overall, Burge says churches are doing okay.

The Hartford Institute for Religion Research reports only 30% of respondents say their churches financial viability is at risk due to the pandemic.

Burge says while the full return to the pews may not happen soon, as a pastor, he doesn’t see it as all bad news.

"Religious institutions are basically social organizations with buildings and money and budgets and programs, and what people are dying for right now — socialization," Burge said. "They want events. They want things to go to. They want carnivals and barbecues and potlucks and bounce houses and all that stuff, and religious organizations have all the things in place to make that happen."

According to researchers the churches seeing the most growth are those that have adopted a hybrid worship model — in person and online, because just like work and school, people want the options.