Panda Might Have Faked Pregnancy To Get Special Treatment 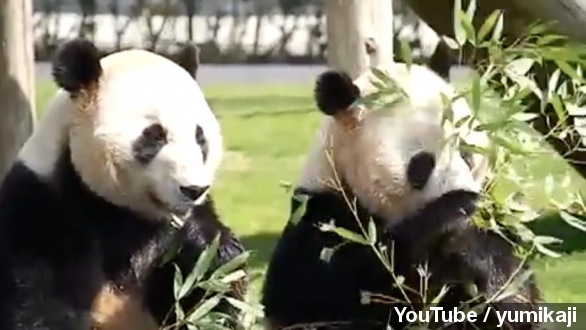 SMS
Panda Might Have Faked Pregnancy To Get Special Treatment
By Katherine Biek
By Katherine Biek
August 27, 2014
A panda in China showed pregnancy symptoms that disappeared after two months of observation. One theory: Her pseudopregnancy was a ploy for perks.
SHOW TRANSCRIPT

When you're pregnant, you need to eat more because of that whole "growing-a-child-inside-of-me" thing. But fakin' it for food? Turns out a panda in China might have done just that.

Ai Hin, the panda on the right, seemed to be pregnant for about two months. She wasn't eating and moving around as much and even had a rise in hormone levels. (Video via YouTube / yumikaji さんのチャンネル)

And then experts from the Chengdu Giant Panda Breeding Research Center, which is where the panda lives, say the pregnancy symptoms just disappeared, and her hormone levels went back to normal.

The Independent reports it's believed Ai Hin was trying to get the special treatment given to pregnant pandas, like getting more food and being placed in air-conditioned rooms instead of being out in the heat.

Chinese news outlet Xinhua even said the center had planned to broadcast the birth, but that was quickly canceled after experts realized the panda was having a "phantom pregnancy."

It turns out this isn't really rare for pandas.

The BBC has reported it's difficult to determine whether a panda is actually pregnant because "an ultrasound scan is not guaranteed to help as a panda [fetus] is tiny, difficult to detect and develops late."

Suzanne Hall, a researcher at the San Diego Zoo's Institute for Conservation Research, says when pandas go through phantom pregnancies, they experience many of the physical symptoms they'd have if they were really pregnant. Hall suggests female pandas that experience pseudopregnancies are trying to "prime" their bodies for the real deal. Because pandas only mate once every two or three years, Hall concludes, "If you miss a year, it's a big loss to your lifetime reproductive output." (Video via YouTube / San Diego Zoo)

Another possible explanation, according to Hall: Some of these pandas might have miscarried, although some that experience pseudopregnancy have never even mated.

The topic of panda reproduction is of interest to researchers for conservation purposes — there aren't many pandas left in the world. The Smithsonian National Zoological Park says 300 are currently in captivity in breeding centers and zoos. About 1,600 live outside of captivity.

Xinhua reported only 24 percent of those female pandas living in zoos and breeding centers actually give birth.

And LiveScience says phantom pregnancies have also been observed among bears and other carnivorous animals. Even human women have been known to experience them.