US And Palestinian Leaders Are Playing A Diplomatic Game Of Chicken 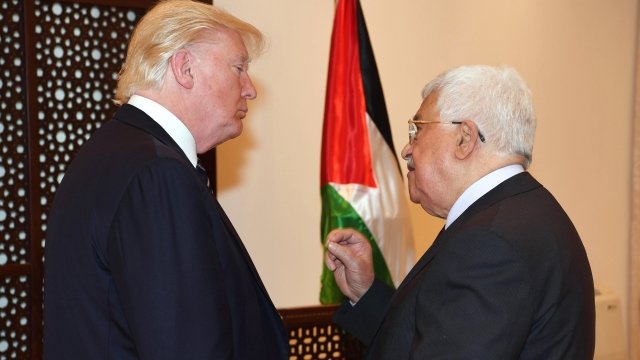 SMS
US And Palestinian Leaders Are Playing A Diplomatic Game Of Chicken
By Jake Jones
By Jake Jones
November 21, 2017
The Palestinians won't talk with the Trump administration unless their office in Washington, D.C., stays open. That decision's up to the president.
SHOW TRANSCRIPT

The official Palestinian delegation to the U.S. has frozen talks with the Trump administration after being told it may lose its office in Washington, D.C.

The pause in communication reportedly came from Palestinian Authority President Mahmoud Abbas himself, and it's temporary. But what happens next depends on whether the Palestine Liberation Organization's office in D.C. stays open.

The PLO is considered the formal representative for all Palestinians by the U.S.

The order to close the PLO's office came from the U.S. State Department; officials there determined Abbas had violated an obscure U.S. law that prohibits Palestinians from asking the International Criminal Court to go after Israelis.

"We have called on the International Criminal Court to open an investigation and prosecute Israeli officials for their involvement in settlement activities and aggressions against our people," Abbas told the United Nations General Assembly in September.

Abbas seemed to be referencing allegations that a group of Palestinian human rights groups sent the ICC. The rights groups said "high-level Israeli civilian and military officials have committed war crimes and crimes against humanity in the occupied West Bank." That communication was dated the same day as Abbas' speech.

The Trump administration has been trying to bring both the Palestinians and Israelis to the negotiating table. President Donald Trump himself said ending the decadeslong dispute over the territory would be "the ultimate deal."

Closing the PLO office may have been a strong-arm tactic to force the Palestinians to the negotiating table. But Abbas' response has turned the move into a diplomatic game of chicken — Trump still has a 90-day window to override the closure before it takes effect and communication is cut off.