Palestinians Could Lose Their Official Delegation In Washington, D.C. 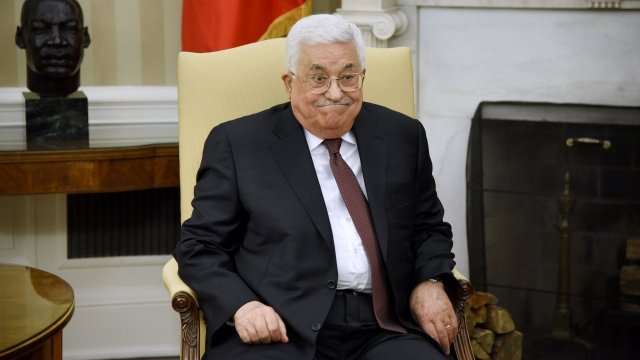 SMS
Palestinians Could Lose Their Official Delegation In Washington, D.C.
By Jake Jones
By Jake Jones
November 19, 2017
President Donald Trump has 90 days to decide whether or not the Palestine Liberation Organization can keep its office.
SHOW TRANSCRIPT

Palestinian leaders have roughly three months to start negotiating with Israel or risk losing their mission in Washington, D.C.

Back in September, Palestinian human rights groups asked the International Criminal Court to "urgently open a full investigation into the situation in the occupied Palestinian territory." Secretary of State Rex Tillerson says that's a violation of U.S. law, pointing to a provision blocking Palestinians from asking the ICC to go after Israel or its citizens.

Israel and the Palestinian Authority aren't currently engaged in direct negotiations. The Trump administration has been trying to bring both sides to the table. Some speculate Tillerson's invocation of this law gives President Donald Trump leverage in ending the decadeslong dispute.

Trump has 90 days to overrule Tillerson's decision. In order to do that, he'll have to consider whether or not the Palestinians are taking part in "direct and meaningful negotiations with Israel," according to U.S. law.

Now, the law doesn't say what "direct and meaningful negotiations" actually look like, so it'll really be up to Trump whether Palestinian officials get to keep their D.C. office.

If Trump does allow the office to close, Palestinian leaders say they'll cut all diplomatic ties to the U.S.