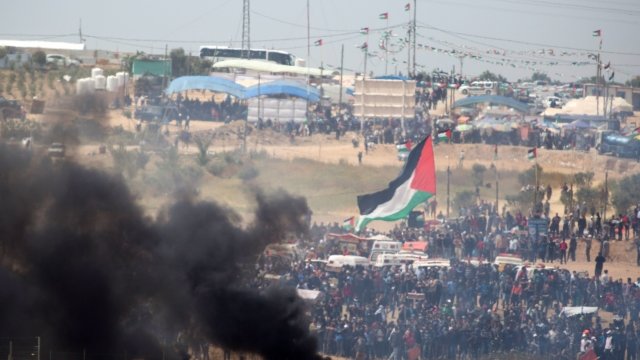 SMS
Palestinians Continue 'Return' Protests Along Gaza-Israel Border
By Jake Jones
By Jake Jones
April 20, 2018
The demonstrations are planned each week on Friday and will culminate on May 15.
SHOW TRANSCRIPT

For the fourth straight Friday, Palestinians in Gaza held protests along the border with Israel. Four people have been reported killed by Israeli fire.

The demonstrations are planned each week on Friday and will culminate on May 15. Palestinians refer to that day as nakba, or the day of catastrophe, when Palestinians fled modern-day Israel following the Jewish state's founding in 1948.

The reported death toll from the protests varies. Most media outlets put it in the 30s.

Gaza has been under Israeli blockade for 11 years. Palestinians there and in the West Bank have long sought their own nation in territory now claimed by Israel.

Israel has responded forcefully to the weekly protests and drawn international criticism for it. Soldiers defending the border are on orders to use live rounds to keep people away from the border fence. Israel says Hamas is using the protests as a cover to infiltrate Israel and commit acts of terror.

The leader of Hamas has warned of more intense demonstrations in weeks to come.