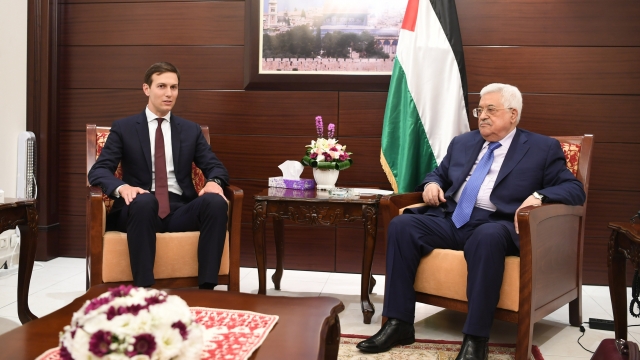 SMS
Palestinian Leadership Rejects US Peace Plan
By LeeAnne Lowry
By LeeAnne Lowry
June 23, 2019
The proposal is supposed to "empower" Palestine, but the state doesn't see it that way.
SHOW TRANSCRIPT

Palestinian leaders have rejected the U.S.' long-awaited economic proposal to solve the Israeli-Palestinian conflict. They believe it's an attempt to ditch a two-state solution.

The White House unveiled the so-called "peace to prosperity" plan on its website. The document says it is "a vision to empower the Palestinian people to build a prosperous and vibrant Palestinian society" through $50 billion in new investment over a decade.

The initiative is spearheaded by White House senior adviser Jared Kushner. He'll formally present it at a workshop starting Tuesday in Bahrain. The conference is partially intended to convince the international community and private businesses to fund the plan.

Israeli representatives are expected to attend, but the Palestinian president told a local news agency that Palestine will boycott the workshop and that “as long as there is no political [solution], we do not deal with any economic [solution]."

A Hamas leader called for governments worldwide to "take a clear stance" against the U.S.' plan.