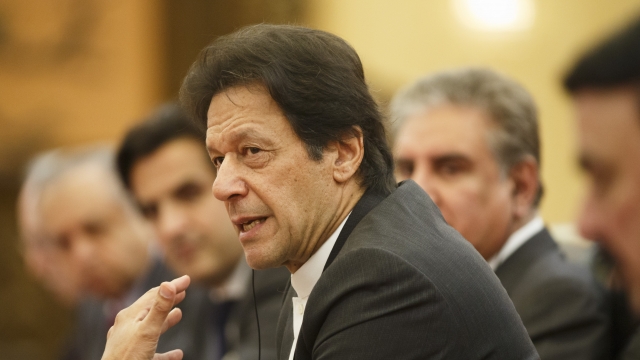 SMS
Pakistan Warns 'Fullest Possible Response' In Kashmir Dispute
By Meg Hilling
By Meg Hilling
September 6, 2019
Tensions continue to rise between Pakistan and India over the region of Kashmir. Pakistan's government warns it will respond to India's actions.
SHOW TRANSCRIPT

Pakistan Prime Minister Imran Khan says India’s actions in the disputed region of Kashmir warrant the “fullest possible response” from his government as tensions between the two nations continue to rise.

This remark comes about a month after India's surprise decision to revoke the special status of Kashmir and Jammu.

Speaking with reporters Friday, Khan says “Pakistan does not want war, but at the same time, Pakistan cannot remain oblivious to the challenges posed to its security and integrity,” and that “this is an issue that impacts not just the South Asian region, but the whoWale world.”

For weeks, Kashmir has been in a state of lockdown and communication blackouts as India has sent troops into the region.

The Muslim-majority region in India’s Himalayan mountains is claimed by both India and Pakistan, and the dispute has lasted decades. Up until August, Kashmir had been able to make its own laws with exceptions on foreign affairs, defense and finance as a result of a provision in India’s constitution.

According to India Today, Khan said war between the two countries was a risk, but that Pakistan would not act first.

Both countries are armed with nuclear weapons, prompting concern from the U.N. Secretary General António Guterres to call upon India and Pakistan “to refrain from taking steps that could affect the status of [the region].”