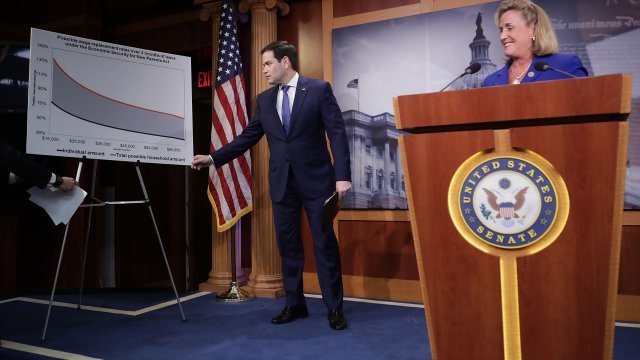 The issue of paid leave has moved from the left towards the center, with a growing number of Republicans now supporting it. But it's causing a divide within the GOP, especially when it comes to cost. For its conservative supporters, the burden on the U.S. economy is one of the central reasons they want a federal policy.

"When you compare the U.S. to other developed economies in Europe and in the other or OECD countries, you actually do find that about 30 percent of the gap in labor force participation can be explained by the lack of what we call family-friendly policies, like paid leave," said Aparna Mathur, resident scholar in economic policy at the conservative American Enterprise Institute and co-director of the AEI-Brookings Project on Paid Family Leave.

Paid leave ensures that any worker who takes a leave of absence from their job for family or medical reasons, like pregnancy and childbirth, will be paid during their time away. Until recently, supporters typically came from one side of the aisle. But in September, the IRS announced that a credit enacted through the GOP-backed tax cuts would become available for businesses that offer it. Last August, U.S. Sen. Marco Rubio introduced a bill that would allow parents to use part of their Social Security benefits to fund it. But paid leave is still far from enjoying majority support.

"What we're seeing some from some conservatives is looking at a way that would have workers be able to exchange future Social Security so that it would appear to have no cost," said Rachel Greszler, research fellow in economics, benefits and entitlements at the Heritage Foundation. "My concern there is that I don't think we would ever tie workers to having to pay for that in the future. I think that inevitably, that would just lead to a big federal program that is borne by taxpayers instead of workers themselves."

As the potential for a federal policy remains uncertain, some states have decided to make changes on their own. New York, New Jersey, Rhode Island, California, and Washington, D.C. have all adopted their own policies. By 2020, Washington state will be added to that list. That leaves a majority of Americans with access only to unpaid leave, but experts that support paid leave say they feel optimistic that the new Congress can come together and work on it.

"If we really, truly believe that this is a fundamental challenge facing our economy, we should be able to find that middle ground that gets us talking to each other. So I'm hopeful that those conversations will continue and that this would be one of the few pieces of compromise legislations to come out of this divided Congress that we are seeing," Mathur said.

"There are plenty of things that policymakers can do that don't involve a brand new federal entitlement program," Greszler said.

According to Greszler, some of those things include passing the Working Families Flexibility Act which would allow workers to choose paid time off instead of overtime, allowing Universal Savings Accounts, and less taxes and regulations.

Labor issues, like paid leave, are expected to be a priority in the new Congress. But with Republicans in control of the Senate and a Democratically-held House, any legislation will require bipartisan compromise.