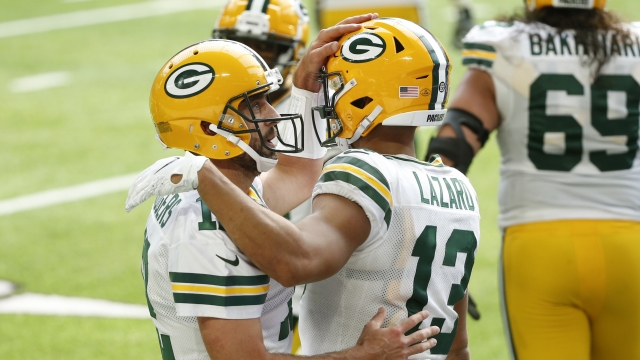 The team was fined $300,000, while quarterback Aaron Rodgers and wide receiver Allen Lazard received fines of $14,650 each.

When he was asked about his vaccination status in an Aug. 26 news conference, Rodgers replied by saying, “Yeah, I’m immunized.”

Rodgers had said Friday he sought alternative treatments rather than the NFL-endorsed vaccinations because he is allergic to an ingredient in the Moderna and Pfizer vaccines. He didn’t specify the ingredient.

The three-time NFL MVP said he didn’t want the Johnson & Johnson vaccine after hearing of multiple people who’d had adverse reactions to it. Rodgers also said he was worried about potential fertility issues from getting one of these three vaccines. The Centers for Disease Control and Prevention says there is no evidence COVID-19 vaccines cause fertility problems in men or women and that vaccinations are recommended for people who want to have children.

Rodgers said he stands behind the comments he made last week about why he didn't get vaccinated, but acknowledges misleading some people about his status before testing positive.

“I made some comments that people might have felt were misleading,” Rodgers said. “To anybody who felt misled by those comments, I take full responsibility for those comments.”

Rodgers didn’t specify the comments he was referencing at the time. But about 20 minutes later, he acknowledged that he had misled some people about his vaccination status.

The NFL determined in its review that Rodgers and Lazard attended a Halloween party while unvaccinated. League protocols prohibit unvaccinated players from gathering outside of the club facility in a group of more than three players.

While Rodgers has appeared at news conferences unmasked regularly, a review of video from the club facility showed no widespread or systemic mask-wearing violations aside from a few isolated incidents involving Rodgers and Lazard. The Packers were fined in part because they knew about the protocol violations at the Halloween party but didn't discipline either player or inform the league.

After declining to perform in the 2019 halftime show, Rihanna said the timing and circumstances this time around were right for her.

Brady, who has won seven Super Bowls and owns nearly every meaningful league passing record, went over 100,000 yards in his 374th career game.