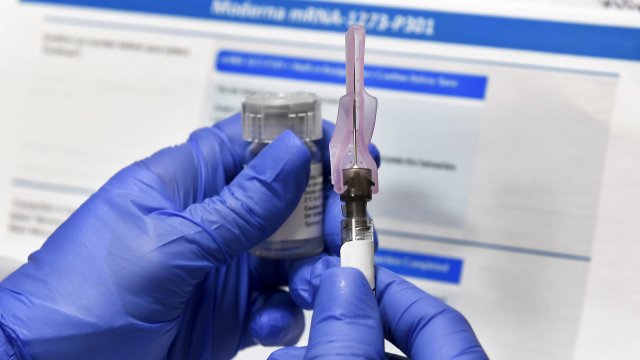 SMS
Oxford University Resuming Vaccine Trial After Side Effect Detected
By Alex Arger
By Alex Arger
September 12, 2020
The drug being developed by Oxford and AstraZeneca is considered a leading contender as a potential COVID-19 vaccine.
SHOW TRANSCRIPT

Oxford University is resuming its clinical trials for a potential coronavirus vaccine after they were paused last week when a volunteer experienced an unexplained side effect from the drug.

AstraZeneca, which is working with the university, said the trial will only resume in the U.K. for now, but it's working with health authorities elsewhere to determine when other trials can run again.

Dr. Francis Collins, the U.S. National Institutes of Health director, told a Senate hearing Wednesday that putting a clinical hold on a trial after a single adverse event is "not at all unprecedented."

"So this ought to be reassuring to everybody listening when we say we are going to focus first on safety and make no compromises," Dr. Collins said. "Here is exhibit A about how that is happening in practice."

Oxford University wouldn't disclose the side effect experience by the test subject. But the New York Times reported a UK volunteer for the trials had been diagnosed with transverse myelitis - an inflammatory syndrome caused by a viral infection that affects the spinal cord.

A spokesperson for AstraZeneca, the drug company partnering with Oxford to develop the potential vaccine, said there was also a brief trial pause in trials in July after another volunteer had an undiagnosed case of multiple scleroris. That was determined to be unrelated to the vaccine.

Oxford University says some 30,000 volunteers are being recruited for the vaccine trials in the U.S., and near 18,000 people have received the drug in other countries.

AstraZeneca's vaccine is one of three contenders currently being tested in late-stage, Phase 3 trials in the U.S. It's seen as one of the strongest candidates among the dozens in various stages of testing.