Owner Of Boat That Caught Fire Served With Search Warrants 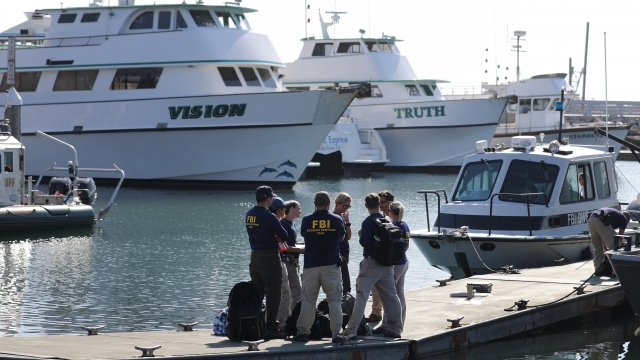 Truth Aquatics has been served with search warrants in the investigation of a boat fire that killed 34 people last week.

The agencies are looking into how batteries and electronics were stored and charged, how the crew was trained, and the boat's design, among other things. They particularly want to know whether the bunkroom's escape hatch was adequate.

During the search, investigators took photos and boxes, but nobody was arrested. Raney said the search warrants do not necessarily mean a crime happened on the boat and that authorities still have to investigate. He said, "You can only do so much with your basic investigative efforts, and at some point you have to use a search warrant as the means to collect information."

Conception was a dive boat. Thirty-nine people were aboard for water and scuba outings when a fire broke out on the boat around 3 a.m. on Sept. 2. Just five people survived, all of them crew members who were above deck when the fire started. The 34 others were below deck sleeping. The five crew members said they tried to rescue the others but the fire was too intense.

A preliminary investigation into the fire suggested serious safety deficiencies, such as the lack of a "roaming night watchman." Law enforcement officials told The Los Angeles Times these watchmen would be required to stay awake and alert passengers in case of an emergency.

According to Coast Guard records, Conception had no safety violations in its two most recent inspections.

Truth Aquatics has asked a judge not to hold it financially responsible for costly payouts to the victims' families. The company said the timing is on the insurance companies but its "hearts and minds are on the tragedy and finding answers.”

Truth Aquatics' owner Glen Fritzler said the company has been working with the National Transportation Safety Board to find those answers. He said: "Our lives have been irreversibly changed by this tragedy and the sorrow it has caused. The families and friends of the victims and survivors are now, and forever, in our thoughts and prayers."

According to the L.A. Times, an ATF pathologist is "convinced" the 34 people died of smoke inhalation. But Santa Barbara County Sheriff Bill Brown, who is also the coroner, said the official causes of death will not be announced until a formal cause of the fire is established.