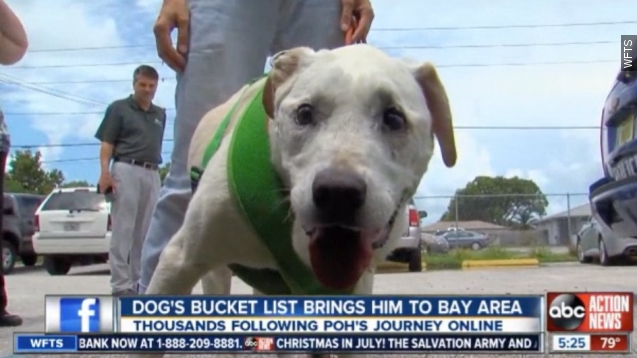 "Poh's bringing us along on his adventure," Thomas Neil Rodriguez told WFTS.

This is Poh the dog. He's from New York City.

And this is Poh with his owner, Thomas Neil Rodriguez. He's also from New York City and works as a DJ.

The two, along with Rodriguez's fiancée, are journeying across the U.S.

That's because Poh, who's 15-years-old, was diagnosed with several health problems in February.

"We went in for a checkup and unfortunately they found multiple tumors," Rodriguez said.

So on March 6, the three took off on a sort-of "bucket list" road trip.

He kept up an Instagram page titled "Poh the Dog's Big Adventure" to let others keep up with their travels. So far, the page has garnered more than 112,000 followers.

According to his veterinarian, Poh still has a bit longer to live, so Rodriguez is hoping to continue their road trip. This time, they're heading to the Midwest.

This video includes photos from Thomas Neil Rodriguez / pohthedogsbigadventure and music by Kevin MacLeod / CC BY 3.0.