Over 700 Texas Infants Exposed To Tuberculosis At Hospital 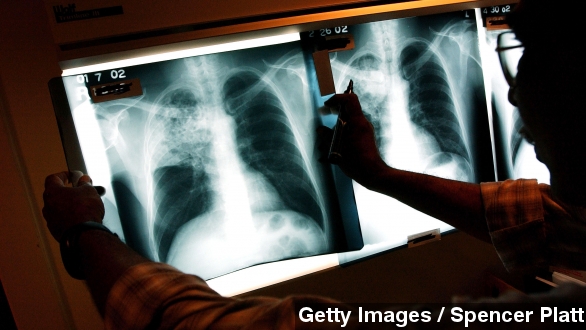 SMS
Over 700 Texas Infants Exposed To Tuberculosis At Hospital

By Jasmine Bailey
September 21, 2014
More than 700 infants and about 40 health care workers in El Paso Texas were exposed to tuberculosis. The hospital is now preforming free screenings.
SHOW TRANSCRIPT

Health care workers at Providence Memorial Hospital in El Paso, Texas are scrambling to give tuberculosis screenings after more than 700 newborns and dozens of employees were exposed to the disease.

KDBC: "A test confirmed a healthcare worker who works in postpartum and the nursery with newborn babies had an active case of tuberculosis."

DR. ENRIQUE MARTINEZ: "The employee was immediately placed on leave and has not worked in the hospital since then."

The worker tested positive on August 25. The hospital conducts annual TB screenings on employees, but officials believe the infected worker contracted the disease after their most recent screening.

The more than 40 employees who came in contact with the sick worker have all tested negative, but now hospital officials are tasked with screening and, if needed, treating the hundreds of exposed infants.

In order to identify patients who might have been exposed, hospital officials matched the infected worker's schedule to the dates newborns were at the facility between September 2013 and August 2014.

In a press release from the City of El Paso Health Department, officials confirmed, "The families of each patient are being contacted via telephone and certified letter with proactive screening instructions. ... Post-exposure screen and follow-up will be provided free of charge. ... Public Health officials are collaborating with state officials and the Centers for Disease Control and Prevention to facilitate these screenings."

According to WebMD, TB, which typically affects the lungs, often doesn't show symptoms. The disease is transmitted through the air.

NHS Choices: "It's usually caught when other people cough up the germs and they then get breathed in and infect the lungs. ... If the immune system is depressed in any way they're more likely to progress to get active disease and become ill with TB."

And that's one reason this outbreak is so troubling — newborns have suppressed immune systems until they're about six months old, making them more susceptible to infection.

But in a press conference last week officials attempted to ease some of the concern.

KGBT: "I want to say off the bat that the hospital is safe."

Regardless, Eva Moya, a professor at the University of Texas at El Paso and an international expert on tuberculosis, told the El Paso Times, there's more work ahead — especially in finding out how the worker contracted the disease in the first place.

"You need a contact investigation to break the circle of infection. The source of tuberculosis could be anywhere. ... As long as you breathe, you are at risk for catching TB."

Only active TB can be spread, and while the disease can be fatal if left untreated, Moya stresses it is curable.