Over 40,000 Palestinians Mark Anniversary Of Mass Protest In Gaza 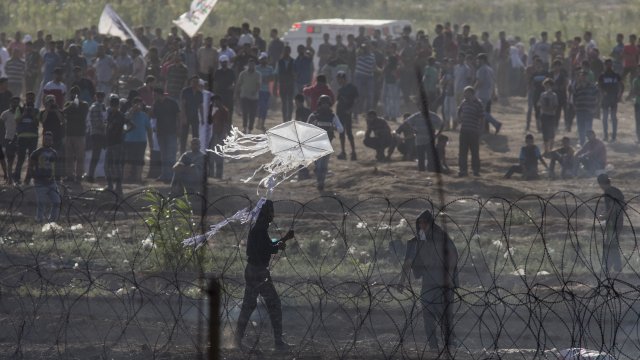 Upwards of 40,000 people gathered Saturday along the Israel-Gaza border to mark the anniversary of the "Great March of Return" protests.

Palestinians have been protesting on the strip every week for the past year. They're demanding the right to return to the ancestral land they say they lost when Israel was created. They’re also fighting for the nullification of the Israeli blockade, a combination of air, sea and land travel restrictions aimed at isolating the area from resources.

Hamas warned protesters against firing rockets or getting too close to the Israeli border fence in an effort to keep things peaceful as its continues negotiations with Israel in hopes of softening the blockade.

Palestinian officials say Israeli police killed four people, including three teenagers, during Saturday’s protests. Dozens more were wounded. More than 250 Palestinians have been killed since the protests began in March of 2018.

Israeli officials say militants fired rockets toward their side of the border, which led Israeli forces to use live bullets and tear gas to disperse the crowd.