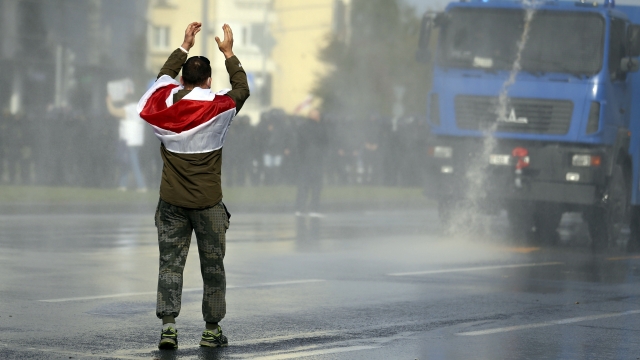 SMS
Over 100,000 Turn Out For Belarus March In 9th Straight Week
By LeeAnne Lowry
By LeeAnne Lowry
October 4, 2020
The country's president continues to stand by the legitimacy of internationally disputed election results.
SHOW TRANSCRIPT

More than 100,000 people turned out for a march in Belarus' capital Sunday — kicking of the 9th straight week of protests.

Police used water cannons to disperse protesters, but the demonstrators stood their ground. Some were detained but it's unclear how many. Often called "Europe's Last Dictator," President Alexander Lukashenko regularly represses those who speak against him.

Protesters and some poll workers say the country's August presidential election — which the incumbent Lukashenko won by a landslide — was rigged. The Russia-backed Lukashenko continues to stand by the legitimacy of his election as the leader of the eastern European nation he has controlled for the last 26 years. Demonstrators say it's time for him to release political prisoners and resign.

Opposition leader Svetlana Tikhanovskaya — who garnered 10% of the disputed tally — is meeting with German Chancellor Angela Merkel Tuesday to ask her to step in as a mediator between protesters and Lukashenko.