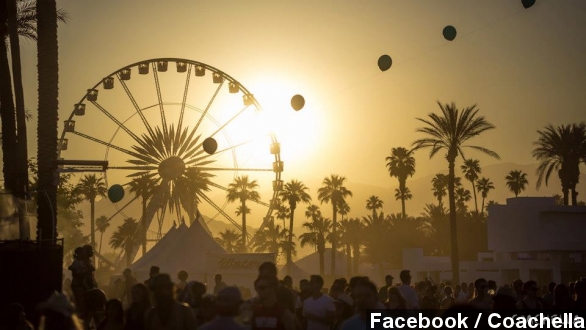 By Adam Falk
January 9, 2014
This year's Coachella lineup is eclectic, featuring an Outkast reunion and big names such as Muse and Lorde.
SHOW TRANSCRIPT

The lineup is out for Coachella 2014, and yes, the rumors are true.

Outkast will make their return on opening night of the festival. In a tweet Wednesday night, Coachella revealed the lineup to its followers with the message "Share it like a Polaroid picture," a reference to Outkast's 2003 hit "Hey Ya!" (Via LaFace Records / Outkast, Twitter / @coachella)

Outkast recently announced they would be going back on tour after a six-year break, and many fans are excited to hear they will be taking the stage on opening night at Coachella. (Via LaFace / Outkast)

The other headliners, Muse and Arcade Fire, are familiar faces at the festival. Muse appeared as an up-and-coming band in 2004 and again in 2010, while Arcade Fire has appeared three previous times. (Via YouTube / muse, NBC / ArcadeFireVEVO)

Coachella kicks off the summer festival season, setting the stage — and giving hints at the lineups — for other major festivals such as Bonnaroo and Lollapalooza.

But unlike most other festivals, Coachella will be held over two weekends again, April 11-13 and April 18-20. This helps ensure Coachella is the most profitable festival in the U.S. It made $67 million last year.

Don't expect that to change, either. The Los Angeles Times reports this is the first festival under Goldenvoice's new deal with Indio, and it's raising max attendance from 95,000 to 99,000.

The eclectic lineup also includes other big acts, including Queens of the Stone Age, a reformed version of the Replacements and Pharrell Williams, who you might remember kind of took over last summer, lending his talents to Daft Punk's "Get Lucky" and Robin Thicke's "Blurred Lines." (Via CBS / QueensStoneAgeVevo, Virgin / Pharrell Williams, YouTube / TheXPNine, Star Trak / Robin Thicke)

Altogether, there are more than 150 bands spanning the Friday to Sunday slots both weekends. And no matter which band's your favorite, people are pumped. (Via Coachella)

Rolling Stone reports, "Tickets for Coachella 2014 have been on sale since May 2013 but the anticipation is clearly high: tonight's announcement caused Coachella.com to crash within minutes of their tweet."