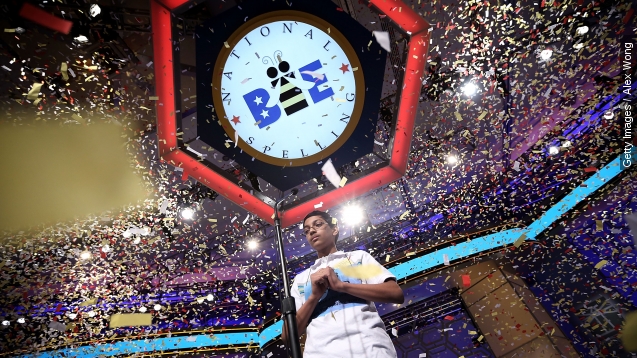 So begins that strange time of year when we all tune into TVs to watch the spoken word. More than that, the spelled word.

The Scripps National Spelling Bee inevitably ends in agony — and a ding — for so many young spellers.

All of them fighting to be that one verbose victor, if you will.

The celebrations and the pressure leading up to them are often admittedly over the top, but to be fair, so are the steps these kids took to get to this level of competition.

Once they've made it past their local and regional levels, the contestants have out-spelled more than 10 million other children. And, as you can see, at this level the words quickly get harder. (Video via Scripps National Spelling Bee)

The national bee is held each year at the Gaylord National Resort and Convention Center south of Washington, D.C. Once they reach this spot, spellers have to make it through preliminaries, semifinals and finals. (Video via Gaylord Hotels)

The man you'll hear from most often is Jacques Bailly, the official pronouncer of the bee and its champion when he was a child in 1980.

"Bioillogicality," Bailly said in a video for the bee.

The first-ever champion was Frank Neuhauser from Louisville, who in 1925 correctly spelled "gladiolus" for the win.

Scripps says no one is quite sure why it's called a spelling "bee." The reference was first documented in 1875, though Scripps says it was likely used orally long before that. (Video via BBC)

A quick disclosure: Newsy is owned by The E.W. Scripps Co.