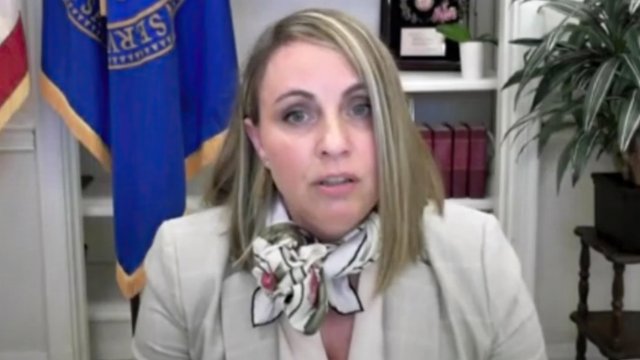 SMS
Ousted Acting HHS IG: We Follow The Facts, We Are Impartial
By Alexandra Miller
By Alexandra Miller
May 26, 2020
Christi Grimm briefed Congress on a 41-page report that found hospitals struggled to keep up with COVID-19 testing demands.
SHOW TRANSCRIPT

Ousted Health and Human Services Acting Inspector General Christi Grimm told the House Oversight Committee Tuesday her report was a snapshot in time, meant to inform officials of issues in hospitals as the pandemic was unfolding.

The 41-page document released April 6 found hospitals were unable to keep up with testing demands due to lack of complete kits and faced extended waits for results. Hospitals also reported shortages of PPE and cleaning supplies, and some said they were "turning to non-medical grade PPE." Grimm's team also found some supplies hospitals received were defective.

She defended her report during the video briefing and said it helped HHS officials with their approach to the pandemic. But a large portion focused on Grimm herself, who was replaced less than one month after her report was released and criticized publicly by President Trump.

Grimm served in the role temporarily and has served in both Democratic and Republican administrations. She is one of five inspectors general to be replaced by President Trump in recent weeks. The office has been without a permanent inspector general for nearly a year.