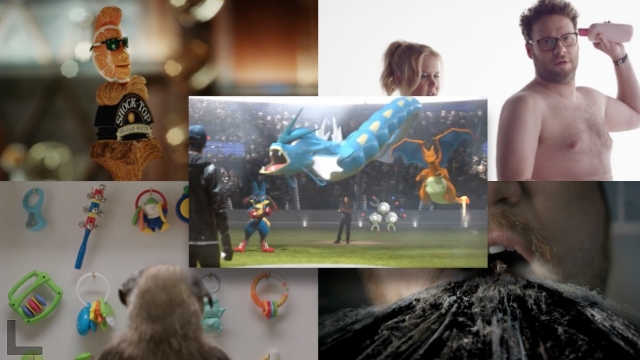 SMS
Our Top 5 Favorite Super Bowl Ads And Teasers Already Released
By Matt Moreno
By Matt Moreno
January 31, 2016
Ads airing during the Super Bowl are going for about $5 million per 30 seconds of airtime. Here are our favorite ads and trailers released so far.
SHOW TRANSCRIPT

Every year, companies put up millions of dollars for 30 seconds of airtime during the Super Bowl, and 2016 is no different. (Video via Marmot)

Here are the best prereleased ads and teasers — so far.

In its teaser, Bud Light brought in comedians Amy Schumer and Seth Rogen for a "Bud Light Party" — likely eluding to similar over-the-top parties of Bud Light-past. Anheuser-Busch InBev is the only beer company allowed to run commercials during the big game so get used to seeing more than a few of them.

Quite honestly, we don't know what to expect from Mountain Dew. A human baby, a dog and something else fused together? Who knows. We'll have to wait until Sunday.

Small business Death Wish Coffee Company won itself a free Super Bowl ad thanks to a QuickBooks contest. That will save them about $5 million, and the ad looks pretty solid.

And we can't get over the Pokémon commercial. We're not sure if this is the final ad or simply a teaser for something bigger, as many Easter eggs throughout the vid allude to, but we're happy to see the nostalgic characters once again.

Super Bowl 50 between the Denver Broncos and the Carolina Panthers takes place Feb. 7.