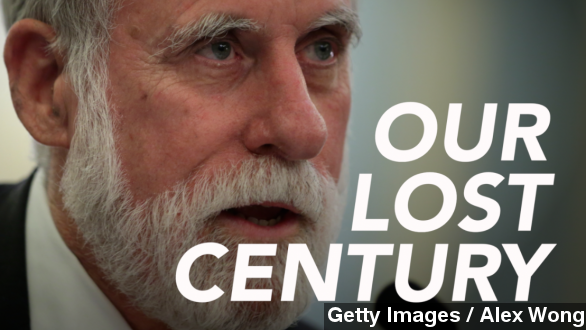 How common are cassette players these days? Or how about floppy-disk drives? Think about how rare those technologies have become, only a couple decades after they were so common.

Now, consider how difficult it'll be to read a cassette tape or floppy disk a few centuries from now. And tech experts and historians worry today's photos and documents stored only on computers or online will, one day, be unreadable.

"The problem is that you have to have something to read the CD with, and if you don’t have a computer …," Vint Cerf said during an interview on "The Colbert Report."

This is Vint Cerf, one of the fathers of the Internet.

And he's warning of a digital dark age. He recently told a tech conference, "We are nonchalantly throwing all of our data into what could become an information black hole without realising it."

It sounds like something from the tech nightmare scenarios from the show "Black Mirror." But it's also a real concern.

Imagine if all those photos of your grandparents in a family photo album had instead only been posted to a mid-1900s equivalent of Instagram. That technology probably wouldn't be readily accessible today.

So, what can we do? Turn to the technology we hate most: printers.

Yes, Vint Cerf and other tech visionaries suggest simply printing and persevering physical copies of photos and documents is the only true way to ensure they'll be around 100 years from now.

That, or hope that, like cassette players today, modern hardware becomes the cool retro gear of the future.

This video includes an image from Getty Images and Deutsche Fotothek / CC BY SA 3.0 DE.