Our Affinity For Fairness Is Not Unique To Humans 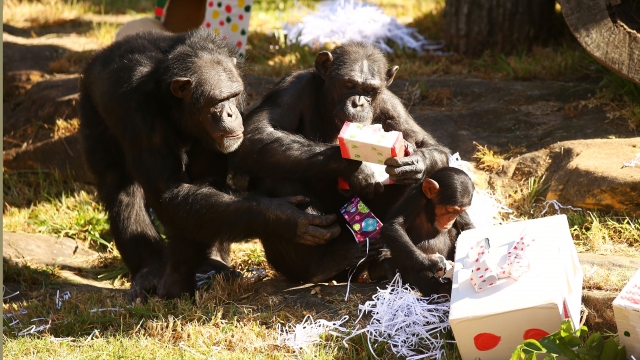 Inequality comes in a million forms. (Sometimes billions.) Remember Occupy Wall Street in 2011? That was big — a protest against growing economic inequality, the 1% vs. the 99%. Or what about the time you and your sister both cleaned up your rooms, but she got $5 and you got $2? No fair! Tears might've been involved.

Inequality is nothing new — and neither is resulting outrage. The resources needed for survival, for example, have always been scarce for some and abundant for others. But that doesn't mean we like it — or even can like it. There's a lot of research showing that we have a natural desire for equality. The animal kingdom shows it crystal clear.

Let's start with capuchin monkeys. Researchers rewarded pairs of monkeys for handing over a token. In one situation, both monkeys were given cucumbers for doing the task. That's equality: Same task, same reward. They were happy. Then scientists mixed it up: One monkey got a cucumber. The other monkey got a grape — which they like a lot more. Same task, different reward, i.e. inequality. The monkey who got the cucumber stopped cooperating, actually throwing it back at the scientist.

The finding: For capuchins, if there's no equality, no participation. Dogs care about equality too, research shows, but they don’t seem to be as discerning as capuchin monkeys. The study focused on two dogs who were trained to "shake" on demand. There were three conditions:

In one, the dogs were given the same treat. They were cool with it.

Then the dogs were given unequal treats. That was OK with the dogs, too. Both continued to participate.

But when one dog got a treat and the other one didn't, that made a difference. The dog that didn't get a treat didn't give a paw. The finding: No treat, no feet.

A power structure among animals can represent a different kind of inequality, like access to mates. A deadly example: Tourists in a Tanzania park witnessed a coalition of chimp underlings attack and kill an alpha male who was especially violent and aggressive. The underlings had had enough.

Muriqui monkeys in Brazil are an example of how a true state of equality reduces the reasons for stress and violence. Both sexes are co-equals, and males and females are the same size. There are no fights over food and no fights over mates.

In the world of human primates, there no doubt will always be some degree of inequality — and in a capitalist society, it's a necessity — so the issue seems to be to what degree.

And you probably will never know why your little sister got paid more for cleaning her room than you did. Maybe Mom and Dad loved her more.