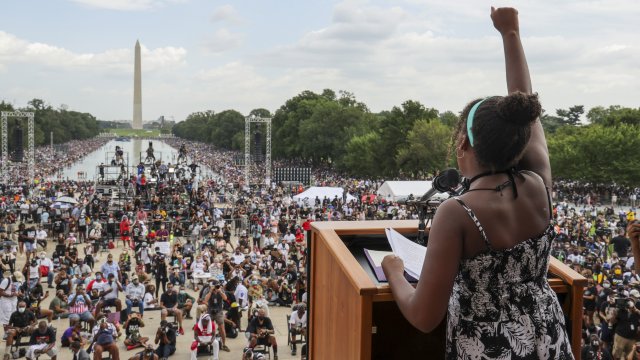 SMS
Local Governments Look To Follow Illinois City's Lead On Reparations
By Jamal Andress
By Jamal Andress
March 25, 2021
Local governments across the U.S. have made more progress toward reparations over the past year than activists have seen in decades.
SHOW TRANSCRIPT

Evanston, Illinois, is now the first and only city in the country to make reparations available to its Black residents for past discrimination. But it may not have that distinction for long.

Local governments across the U.S. have made more progress toward reparations over the past year than activists have seen in decades.

"I'm in the mainstream. I'm no longer on the fringe shouting and screaming about the right for and the need for reparatory justice," Nkechi Taifa, commissioner for the National African American Reparations Commission, said.

Reparatory justice, or reparations, is defined as "making amends for a wrong one has done." In the past, reparations have taken many forms.

For 80,000 Japanese Americans, it was $1.6 billion worth of cash payments for being imprisoned during WWII. For Germany, it was paying $7 billion to Israel for its role in the Holocaust.

TAIFA: "The harm was so very multifaceted. Thus, the remedy can and should and must be multifaceted, as well."

Evanston's plan focused on housing, allocating $400,000 for eligible Black households to spend on things like home repairs and down payments. Evanston's Black residents will need to prove their relation to people who lived in Evanston from 1919-1969, when housing discrimination ran rampant.

The majority of the money will be pulled from tax revenue from the sale of recreational marijuana — an approach Evanston's southern neighbor is considering, too.

"I couldn't think of a better cause for the millions, soon to be billions, that is going to be exchanged in Illinois in the cannabis space," Chicago 16th Ward Alderman Stephanie Coleman said.

Alderman Stephanie Coleman is in charge of Chicago's subcommittee on reparations. The committee is charged with "examining the state of equity" in Chicago. The committee had its first meeting just days before Evanston's historic vote.

COLEMAN: "This should be a priority because we built this city. A Black man founded this city. We should do it for our forefathers and mothers and for the generations after us."

While Chicago is one the first major cities to take action on reparations, smaller cities like Providence, Rhode Island, and Asheville, North Carolina, are farther along.

Providence's mayor, Jorge Elorza, signed an executive order over the summer focused on bringing reparations to New England. The executive order has three phases, the first of which is a nearly 600-page report outlining injustices against the Black community in Providence.

ELORZA: "There's so many injustices that happened here locally, that we just don't know about. … The consequences of it are still alive today. And they can be felt. And that's what we want to come through from this report."

Elorza and nearly 1,400 other mayors of U.S. cities recently endorsed H.R. 40, the House bill that would allocate $12 million to study the history of slavery and discrimination and create a proposal for remedies.

Surveys show most Americans are against reparations. A Reuters/Ipsos poll last year showed just one in five thought using tax money in this way was the right thing to do. But Elorza believes efforts like his in Rhode Island and in Evanston are the proof of concept needed to eventually get a national model.

ELORZA: "You start at the local level, but the idea is to build up enough momentum so you can be taken up by other institutions in society, by other levels of government, becoming county or state and eventually become something that's taken up at the federal level. … It's like they say: There's nothing more powerful than an idea whose time has come. And this idea's time has come."