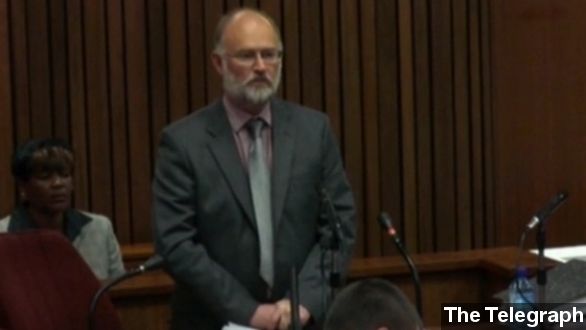 "The Blade Runner sitting with his head down and his hands against his ears, barely listening. His own witness clearly contradicting him in court today." (Via ABC)

Roger Dixon was called to the stand as the defense's first forensic expert witness. But after being grilled by the prosecutor nicknamed "Bulldog," it seems his story of events may not be matching up with the Pistorius testimony. (Via Sky News)

Oscar Pistorius claims that a magazine rack in the bathroom where Steenkamp was shot was off to the side of the room and was placed in a pool of blood by police, but Dixon contends the rack was moved by Pistorius out of the pool blood after Steenkamp was shot.

"I am not saying anybody else was right or wrong." (Via ABC)

CNN points out, "The question is important in part because Pistorius contends that police contaminated the crime scene by moving certain key items, including the magazine rack."

The prosecutor also attacked Dixon's qualifications to even be an expert in the trial, establishing that he had only witnessed three autopsies in his life, did not attend Steenkamp's postmortem, and despite contradicting the prosecution's pathologist admitted he was a "layman" on matters of pathology. (Via The Telegraph)

The trial is set to resume May 5 with the defense's next witness.